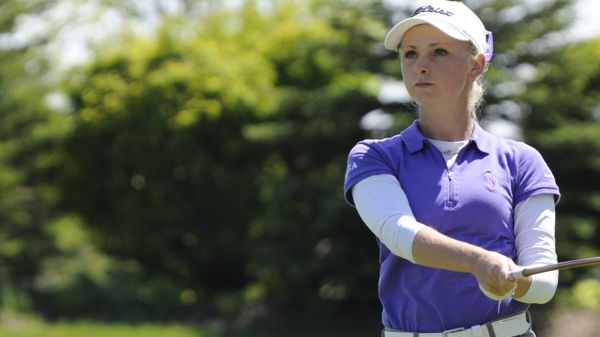 Maddie Szeryk, 17, of Allen, Texas, fired an opening round 1-under 71 to lead the Royale Cup Canadian Junior Girls Championship at Cherry Downs Golf and Country Club on Tuesday.

Szeryk, a dual-citizen of the United States and Canada, heads into the second round with a five stroke lead, after carding five birdies on extremely tricky greens in her first round.

“I started off chipping in for birdie, so that was nice,” Szeryk said following her round. “I just kind of played solid and tried to focus on hitting fairways and greens and leaving it in the right spot, because if you’re above the hole it’s really tough to putt.”

Trailing Szeryk is defending champion and Team Canada member, Brooke Henderson, 15, of Smiths Falls, Ont. Henderson carded a 4-over 76 to open the tournament after an early triple bogey on the par-4 3rd hole. Tied for second alongside Henderson is Team Canada Development Squad Member, Taylor Kim, 18, of Surrey, B.C.

In the 36-hole Inter-Provincial Team competition, the Team Alberta contingent of Jaclyn Lee, Sabrine Garrison and Brianna Carrels leads by three strokes over Team Quebec and Team Ontario after opening with a 12-over 156. In the Juvenile division, Henderson currently leads by two strokes over Getty, He and Li.