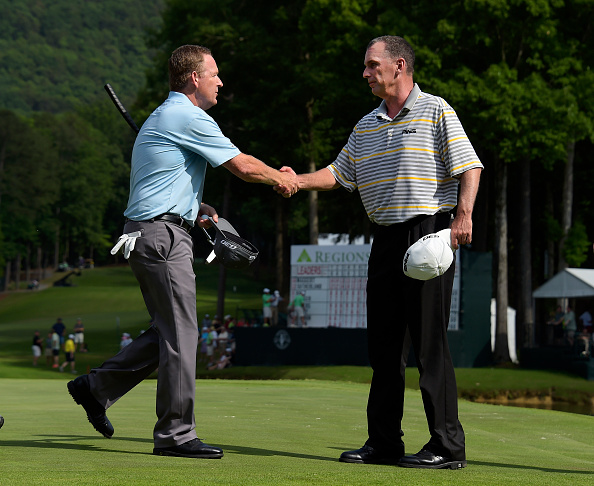 BIRMINGHAM, Ala. – Jeff Maggert didn’t let the missed putts haunt him when he faced the most pressurized one of the day.

Maggert won the Regions Tradition on Sunday for his first Champions Tour major title, beating Kevin Sutherland with a 3-foot par putt on the first hole of a playoff. He missed from a similar distance on No. 17 and failed to hole other modest putts over the final nine holes in a day-long, back-and-forth Shoal Creek scramble.

“No one likes to miss 3-footers,” Maggert said. “It doesn’t matter if you’re a 20-handicapper or a golf pro. When you miss a few of them, you start to second-guess yourself. On 18, I said, `Hey, you missed it, no big deal, on 17. Let’s just go to your routine and your game plan and try to put a good stroke on it.’

“I was nervous, shaking a little bit.”

It didn’t show in his stroke on the straight-on putt.

Sutherland two-putted for bogey to set up Maggert for the winning shot on the 18th hole.

Maggert’s only previous Champions Tour win came in Mississippi last year in his first start on the 50-and-over tour. He won three times on the PGA Tour, the last in the 2006 St. Jude Classic.

Sutherland had his second runner-up finish of the year and remains stuck at one career win in 544 tournaments spread across the PGA, Champions and Web.com tours.

Maggert won $345,000 and moved into the points lead after the first of five majors.

Sutherland’s tee shot on the playoff hole dropped into the left bunker a few feet from the lip and about 130 yards from the green. His next shot landed near fans lining the fairway and he was left needing a long putt to make par.

Sutherland said a nearly day-long struggle with his driver “reared its ugly head at the last moment and got underneath the lip of the bunker and didn’t have much of a play really. Couldn’t get it to the green.”

He said jitters weren’t a problem, though.

“I was as relaxed as you could possibly be,” Sutherland said. “I was much more relaxed on the 19th hole than I was on the first hole.”

Jeff Hart and Gene Sauers both shot 69 to tie for third at 11 under, three shots back. Michael Allen (68), Bernhard Langer (70), two-time winner Tom Lehman (69) and defending champion Kenny Perry (70) were 9 under.

Both players parred the 18th hole the first time to force the playoff. Maggert needed to make a three-footer to stay alive, similar to the one he missed on the previous hole.

“Second time’s the charm,” Maggert said, adding that the shot on 17 “was a putt that I was expecting to walk up and tap it in.”

It was a change-up after Maggert had birdied the final two holes each of the previous two days.

Maggert’s the first 36-hole leader to hold on for the win at the tournament since Tom Watson in 2003.

Maggert and Sutherland traded birdies on No. 15 to remain deadlocked after jockeying for position the past two days and then set up similar tap-ins on 16.

Sutherland had reclaimed the edge with an eagle on the par-5 third hole, while Maggert bogeyed for a three-stroke turnaround. He regrouped with a birdie on No. 6 while Sutherland had three bogeys on the first nine holes for a 1-over 32.

Maggert had three-putted from five feet on No. 12, saying he had trouble gauging the speed of the greens after overnight rains.

Hart, meanwhile, managed his first top-three finish on the Champions Tour, having finished no better than 29th in his three previous events this season.

He extended his string without a bogey to 54 holes and finished with a birdie. Hart’s two bogeys was the fewest in a Tradition.

“At that point, I didn’t care where I finished,” Hart said. “But I didn’t want to blow the non-bogey string on the final hole.”

Sauers ended with back-to-back birdies. He has finished in the top three over the last two majors he’s played, losing a playoff to Colin Montgomerie in last year’s U.S. Senior Open.