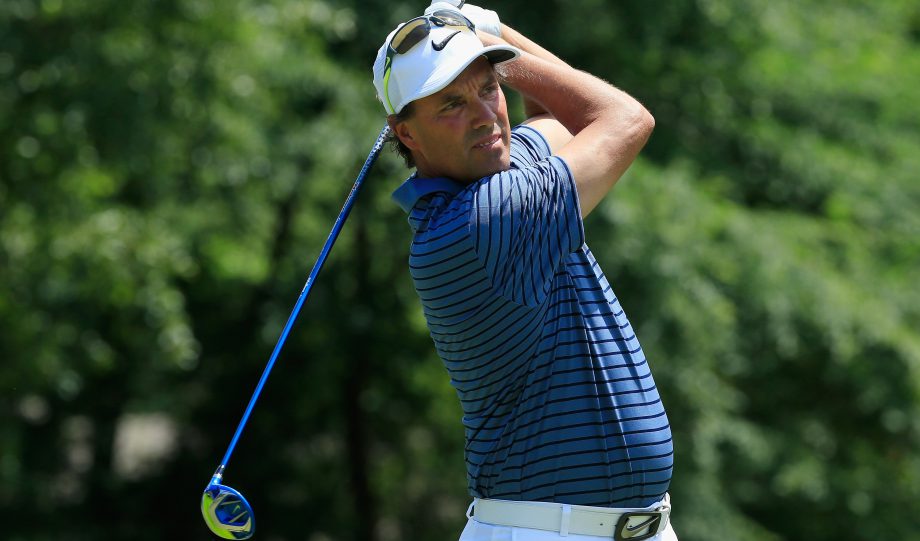 Maggert birdied the par-4 18th for a 3-under 69, and playing partner Parnevik had a bogey on the par-4 17th in a 68 at The Woodlands Country Club.

“I just have to get some confidence with the putter. That’s the thing,” Daly said. “My chipping wasn’t very good today, but I’m under par and I think seven is leading, you never know what can happen tomorrow. Maybe try to get maybe a little more aggressive with the driver, hit it a little bit more, get some more wedges in the holes and give myself a chance.”

The two-time major champion made four straight bogeys in the middle of the round and rebounded with birdies on 15 and 18. He turned 50 on April 28.

“Just bad execution, bad chips, bad putts,” Daly said about the bogey run on Nos. 8-11. “I actually thought I had a good shot on 9. I hit a 9-iron and it went over the back and you’re dead. But all in all, I hung in there. … I didn’t hit it real close today. The wind was a little tricky on the back nine.”

Maggert had four birdies and a bogey.

“Up and down today,” Maggert said. “I think the golf course played a couple shots harder today. I hit the ball great. I didn’t even struggle with the ball-striking. … I was trying to press a little bit on the back nine, trying to make up a little ground. But it was good. Gusty wind, and also the direction was shifting quite a bit, so that made shot selection harder.”

The Woodlands resident and former Texas A&M player led the tour with four victories last year, including major wins at the U.S. Senior Open and Regions Tradition. He won three times on the PGA Tour.

“I had a great career, and it’s different now,” Maggert said. “I think the difference is, when you’re younger, we’re all out here trying to prove things to ourselves and now, it’s more like there’s not a lot left to prove. I’d like to play well here tomorrow, but just going to enjoy the day and really looking forward to this week to jump-start my summer.”

Parnevik eagled the par-5 13th and had four birdies and two bogeys.

“The game didn’t feel good today, but putting felt a little bit better, even though I seemed to miss every short one,” Parnevik said. “Then, I holed two monsters, to sort of kind of even it out.”

The 51-year-old Swede is winless on the 50-and-over tour. He won five times on the PGA Tour.

“It’s great to feel the butterflies come alive,” Parnevik said. “All of a sudden you go, ”Oh, I have to focus on these shots.’ It’s different and it’s going to be fun tomorrow, just to be able to have a chance to win.“