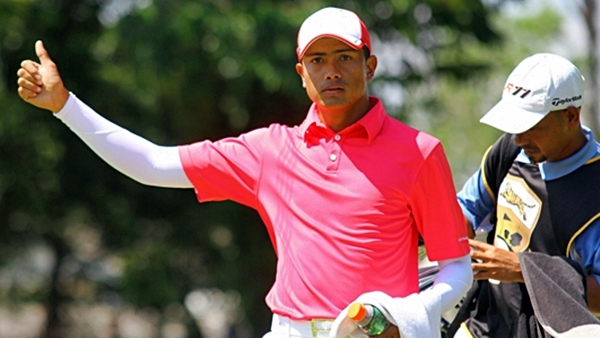 KUALA LUMPUR, Malaysia – Malaysian golfer Mohd Nazri Zain had a rare hole-in-one on a par-4 during the SapuraKencana National Qualifier tournament on Wednesday.

He holed out on the water-lined 289-yard 16th on the Kuala Lumpur Golf and Country Club’s west course.

“I saw the ball rolling into the hole and I started celebrating with my caddie,” Zain said. “It was unbelievable. This is definitely a huge achievement for me and I’ll keep the ball as a memory.”

Zain finished with a 2-over 73 and in 20th place, 15 strokes behind playoff winner Danny Chia of Malaysia. By winning, Chia earned a place in the $7 million CIMB Classic, a PGA Tour and Asian Tour event in late October.

There has been only one hole-in-one on a par-4 on the PGA Tour, by American golfer Andrew Magee at the TPC Scottsdale during the FBR Open, now Phoenix Open, in 2001. Asian Tour officials said Wednesday that Zain’s ace was the first on a par-4 on their tour.

Magee’s hole-in-one came with a driver on the 332-yard 17th. His tee shot ran up onto the green while the group of Steve Pate, Gary Nicklaus (Jack Nicklaus’ son) and Tom Byrum were putting. Magee’s ball bounced on to the green, ran through Byrum’s legs and struck Byrum’s putter and deflected about eight feet into the hole.

Raber, who at first thought he had lost his ball with his tee shot before discovering it in the hole, lost the ArrowCreek Open in a three-man playoff.