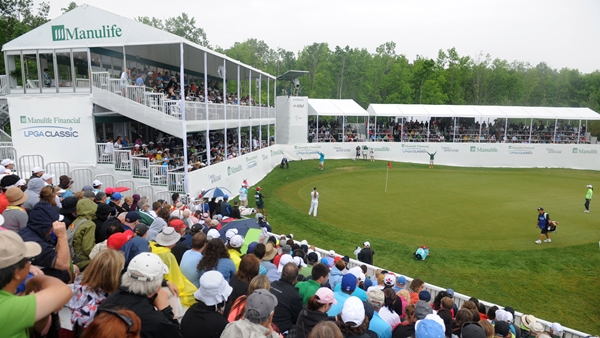 “We are thrilled to have Milaina join our team,” stated Gene Hallman, president and CEO, Bruno Event Team. “We worked with Sports Properties International to find the perfect candidate to lead the Manulife Financial LPGA Classic team for us as the event transitions to Whistle Bear Golf Club in Cambridge. We couldn’t be happier to bring Milaina on board. She brings a wealth of industry knowledge and experience to an already successful tournament, and we know she will be a great fit for this community and for this event.”

Wright replaces outgoing tournament director Richard Kuypers, who was also previous employed by Golf Canada prior to his appointment as tournament director of the Manulife LPGA Classic. Kuypers left his role with the Bruno team to join Molson Coors Canada in sponsorships & events.

Wright is the latest to join the Bruno Event Team and brings extensive experience in professional golf tournament management with both the LPGA Tour and PGA TOUR. During her seven year tenure with Golf Canada, most recently in the role of manager of professional championships, Wright played an integral role in conducting Canada’s Men’s and Women’s National Open Championships – the RBC Canadian Open and the Canadian Pacific Women’s Open – where she was involved in various aspects of tournament operations, sponsorships, volunteer recruitment and player relations. Wright has also worked for the Canadian Centre for Ethics in Sport carrying out the Canadian Anti-Doping Program at various national and international competitions including the 2010 Olympic Games in Vancouver. A graduate of both Colgate University (Bachelor of Arts) and Brock University (Master of Art in Applied Health Sciences), Wright is a former women’s collegiate basketball player at both the NCAA Division I and CIS level.

“I’m delighted to join Bruno Event Team and start working on this exciting event,” stated Wright.  “I look forward to working with Sports Properties International and an incredible title sponsor, Manulife.  I know it will be fulfilling to work on such a great event, which is so well supported and celebrated by the community.”

Since the tournament’s inception in 2011, Ontario-based Sports Properties International hired Bruno Event Team to manage all aspects of the LPGA tournament, including marketing, sales, operations, volunteer coordination, sponsor and player relations and all event logistics.

The Manulife Financial LPGA Classic will take place June 3-7, 2015, at its new home Whistle Bear Golf Club, remaining within Waterloo Region in Cambridge, Ontario.  In its first three years, the Manulife Financial LPGA Classic has seen more than 184,000 spectators pass through the gates at Grey Silo. Inbee Park, from South Korea received the top-honor this year, tying a course record with a 10-under 61, making it her 10th LPGA Tour title. Park finished three shots ahead of World Ranked No. 13 Cristie Kerr.