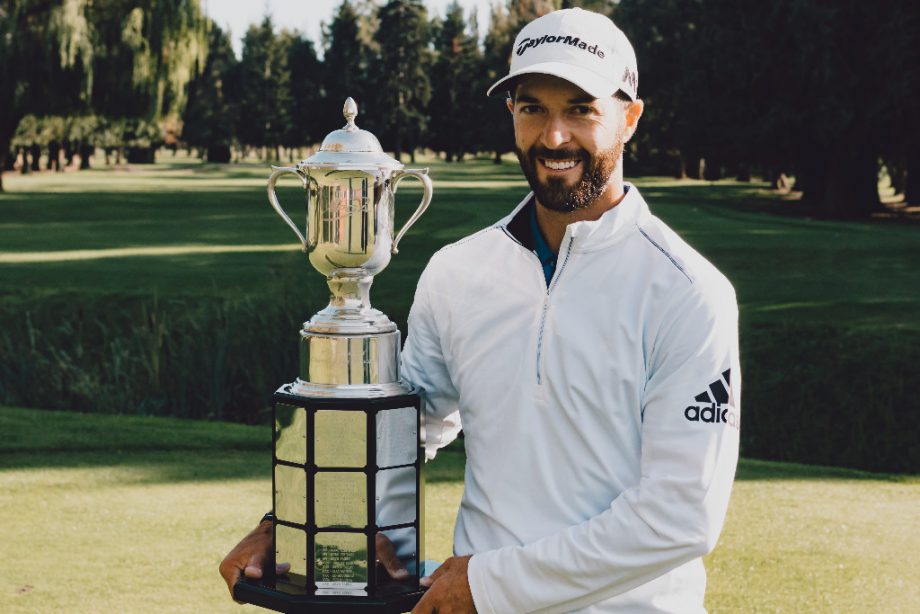 Bussieres closed with a final-round 6-under-par 66 Thursday, making an eagle and three birdies over the final nine holes to chase down and eventually pass his good friend Sonny Michaud.

Heading into the final round, Michaud held a commanding five-shot lead over the PGA of Canada’s No. 1-ranked player. Bussieres knew, however, a solid round of Wednesday could give him the opportunity to hoist the championship trophy at day’s end.

“With conditions being a little windier and firmer today, I knew it wouldn’t be easy out there, so if I put together a really good round I could still catch Sonny,” said Bussieres. “I made that eagle on No. 10 and that gave me a little fire and after the birdie on 15 I just had a feeling I had it because I was just hitting it so well.”

For what seemed like miles and miles worth of made putts over the first two days for Michaud, his wand went cold Wednesday in Richmond en route to a final round even par 72.

“It’s tough trying to win wire-to-wire because if you’re behind there’s no pressure, you just play golf,” admitted Michaud. “I don’t feel like I lost this championship, rather Marc actually won it. But I do wish I was holding the trophy right now and there’s a sour taste in my mouth.”

With the win in Richmond, Bussieres solidified his place atop the PGA of Canada Player Rankings presented by RBC.

“I’ve been calculating the rankings points and I knew that if I played well this week it would pretty much secure my spot for next year’s RBC Canadian Open,” said Bussieres. “Now with this win, it’s going to be hard for anyone to catch me at the top, so I can start preparing now. I definitely want to put on a good show and represent the PGA of Canada well.”

Originally launched in 2011, the PGA of Canada Player Rankings presented by RBC and has received much praise over the past six years.

Players ranked inside the top 64 earn invites to the PGA Championship of Canada. The player who is ranked No. 1 at the conclusion of the championship earns an exemption into the RBC Canadian Open.

The Mike Weir Player of the Year Award is also based on points earned throughout the calendar year. Players gain these points based on performance at national and zone tournaments.

Bussieres earned the Mike Weir Player of the Year Award honours in 2016 after capturing the PGA Championship of Canada at Victoria Golf Club.

The Quebec squad (Bussieres, Bedard, Michaud and Jean-Philip Cornellier) won the 36-hole Inter-Zone competition Tuesday (which is compiled of four players on each team representing their respective PGA Zone and is contested over the first two rounds) by an astounding 28 shots.

The next PGA of Canada national championship takes place Oct. 12-14 at Cabot Links for the RBC PGA Scramble of Canada.