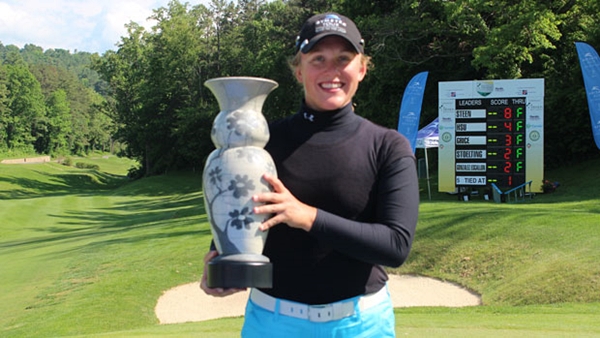 ASHEVILLE, N.C. – Marissa Steen won the Friends of Mission Charity Classic on Sunday for her second Symetra Tour victory of the year.

The 24-year-old former University of Memphis player closed with a 3-under 69 to finish at 8-under 208 at the Country Club of Asheville.

“I’m on Cloud 9,” Steen said. “Just to see all of the hard work pay off because my motto has always been, `Hard work beats talent when talent doesn’t work hard.’

“I’ve always kind of been the underdog. I wasn’t the most highly ranked college player or amateur player but I’ve always worked my butt off. All of the sacrifice my family has made, my swing coach, the whole support system around me has been unreal and I couldn’t do anything without them.”

“It’s huge,” Steen said. “I was joking before that money talks, but it does and that’s what it’s about at the end of the day out here as much as we don’t want it to be it is so to get two wins and a couple of more top 10s on top of it has been huge.”

Taiwan’s Wei-Ling Hsu was second, four strokes back after a 70. She won the Self Regional Healthcare Foundation Women’s Health Charity Classic last week in South Carolina and was in position to win a $1 million bonus with a victory Sunday and another next week in the Symetra Classic in Charlotte.