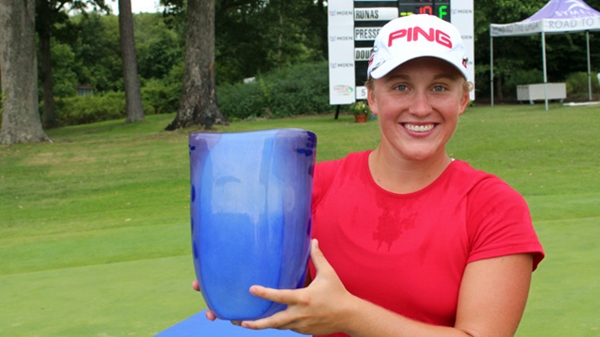 RICHMOND, Va. – Marissa Steen won the Eagle Classic on Sunday for her third Symetra Tour title of the year, earning $15,000 to jump from second to first on the money list with $75,348.

Steen, the 24-year-old former University of Memphis player from West Chester, Ohio, closed with a bogey-free 6-under 66 for a four-stroke victory. She finished at 14-under 202 at Richmond Country Club.

“It feels just as good as the first two,” Steen said. “Being tied for the lead going into Sunday and then putting up a solid round was great. I just wanted to stay within myself today and feel like I did that very well. … It feels really good to go out and have my lowest round of the week on Sunday.”

Steen had already wrapped up a spot next year on the LPGA Tour, with the top 10 on the money list after the final three events earning cards. As a three-time winner, she also has the option to play on the LPGA Tour for the remainder of this season.

“I talked with one of the officials after the round and it sounds like I can get into the tournament in Portland so I’m going to definitely think about that and talk it over with my family,” Steen said. “I haven’t made any decisions yet but I do plan on playing in Daytona for the last Symetra Tour event of the year.”

Steen also won in April in Sarasota, Florida, and May in Asheville, North Carolina.

Demi Rumas was second. She finished with a 67.

Runas jumped from 20th to 12th on the money list.

“It takes a little bit of weight off the shoulders but not much,” Runas said. “Everyone is kind of bunched up there so you’ve got to keep doing the same thing for the last three events.”

Madison Pressell followed at 9 under after a 67.

Overnight leader, Nicole Vandermade of Brantford, Ont., carded a 76 Sunday to fall into a tie for 15th at 4-under 212.