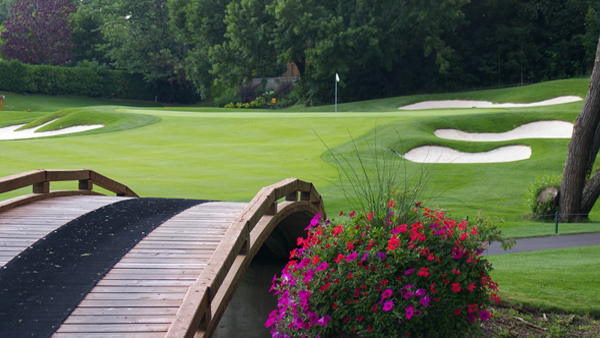 TORONTO, ON (by Brent Long) – Members at Markland Wood Golf Club are coming to appreciate the calm after the storm as they prepare to celebrate the club’s 50th anniversary throughout 2014.

The storm first blasted many Toronto area clubs and homes last summer with torrential rains and flooding. Markland Wood’s 18 low-lying fairways and bunkers were flooded in July by an overflowing Etobicoke Creek. The course remained closed for nearly two weeks for clean-up before fully opening a month later with rebuilt bunkers.

If that wasn’t enough, Mother Nature’s fury struck Toronto in December with a devastating ice storm, followed by the Polar Vortex’s flash freeze in early January that hit clubs across Ontario, Quebec and the North Eastern United States. Many courses in the Greater Toronto Area with poa annua (annual bluegrass) greens, including Markland Wood, were especially hard hit by a 4 to 8 inch blanket of ice over much of the course that severely damaged thousands of greens.

“You could say that Mother Nature has not been very kind to us, but the membership has really pulled together and turned these natural disasters into a positive outcome,” says Superintendent Owen Russell who has been dealing with the aftermath on a daily basis. Both private and public clubs across the GTA, and Ontario for that matter, continue to deal with the aftermath of the harshest winter in at least 25 years.

Since last summer’s storm, the club has spent close to $2 million to repair damage including; rebuilding all 65 bunkers with assistance from architect Cam Tyers, sodding 11 acres of fairway, installing a new irrigation system, cleaning up trees damaged by the ice storm and sodding 14 greens with 72,000 square-feet, or 8,550 rolls of Aggressor bentgrass. The remaining five greens will be re-surfaced at the end of season to ensure consistency for putting areas.

“I think the resiliency of the membership is quite remarkable and inspiring because they have been able to accept the circumstances and move forward very quickly,” he adds. Now there is sod shortage in Ontario and clubs are looking outside of the province and the country to try and make repairs. “When we fully open the course in June with the new greens our members are essentially going to have a new golf course to play on and that’s something they should be very proud of,” Russell says.

“While it was initially hard to see the silver lining through the devastation incurred, that dejection quickly turned to the realization of the opportunity to revitalize the golf course,” says Markland Wood GC President, Scott Peart. “We won’t be playing on the new greens for a few weeks, but I can already feel the anticipation building within the membership.  It’s going to be an exciting 50thanniversary celebration with several member events in the works, a few great charity tournaments and the club is hosting the 15thannual Toronto Star Women’s Amateur from June 23 to 26th.”

The club is also publishing a book “50 Years of Fellowship” to commemorate the 50th anniversary. If you have a chance to read it you’ll learn that the Markland Wood area goes back as far as 1810, when John Silverthorn and his family settled here along the Etobicoke River. They established a saw and gristmill that operated until 1870 when the flow of water diminished to the extent that there was insufficient power to drive the mill. The Silverthorn family then turned to farming, before selling it to developer Marc Cavotti in 1958. His associates lightheartedly referred to the property as “Marc’s Land”, which was the preamble to the area’s final moniker of Markland Wood.

After the initial plans for the Markland Wood community were prepared, it was discovered that the land adjoining the Etobicoke River was situated on a floodplain established by Hurricane Hazel, and not suitable for residential development. Being the avid golfers that they were, Cavotti and his associates decided this land would be an ideal place to put a golf course. The project was then turned over to architect Eric Hanson, who transformed the unique crescent shaped parcel of land into an 18-hole golf course. The Club officially opened with Bob Hope as special guest of Head Professional Al Balding, a member of both the Canadian and the Ontario Golf Halls of Fame.

The course plays from 4,763 yards to 6,285 yards, par-70 from five sets of tee blocks, but it is the narrow fairways, fast greens, strategically placed bunkers, mature trees and the ever present, Etobicoke Creek, that define its character and challenges players of every level.

Despite the steep repair bill, Peart says the club of 700 members remains in an excellent financial position having now completed a significant portion of capital work on the course without any assessments to the members. It’s a place where denim can be worn year-round in the lounge of a modern full-service clubhouse where families are encouraged to become friends with other families. The club’s slogan for this year is “Celebrating 50 years of Fellowship.”

“The Markland Wood residential community has the motto “a circle of friends”. This holds true for Markland Wood Golf Club as well,” Peart says.  “It is a tightly knit group of golfers who are proud of their golf course and support their fellow members.  As we turn the corner and prepare for the journey for the next 50 years I believe the club is well positioned for growth and prosperity.”

Janes has more than two decades of experience in golf, as well as communications, sponsorship and event marketing.
As commissioner of the Canadian Tour, Janes led talks that resulted in the launch of PGA Tour Canada in 2013.

He became chairman of the Canadian Tour board of directors in 2002 and managed a financial turnaround in 2005 in his first year as commissioner, rebuilding the tour’s profile. The tour also gained full membership in the International Federation of PGA Tours.

WATERLOO, ON – Three more top players on the LPGA Tour join the field for the 2014 Manulife Financial LPGA Classic at Grey Silo Golf Course, June 4 to 8.

Joining previously announced No. 2 ranked Stacy Lewis, and No. 3 ranked Lydia Ko, is the number one player in the Rolex Women’s World Golf Rankings, Inbee Park. Park is a nine-time winner on the LPGA Tour, and first player in the modern era to win the first three major championships of the season (Kraft Nabisco Championship, Wegmans LPGA Championship and U.S. Women’s Open) in 2013. Park was awarded Rolex Player of the Year in 2013, becoming the first South Korean in LPGA Tour history to hold this title. Park won the money title for the second-consecutive year and became just the second player in history to earn at least $2 million in back-to-back seasons.

Suzann Pettersen, the fourth-ranked player in the Women’s Rolex Golf Rankings, has won 14 tournaments as a professional, on the LPGA Tour. She is coming off an extremely strong performance in the 2013 season, notching four LPGA victories, including her second-career major championship at The Evian Championship. The Oslo, Norway native is currently in her 11th season on the LPGA Tour and is currently the highest ranked European player in the world.

Anna Nordqvist also joins the field for the Manulife Financial LPGA Classic. In 2013, Nordqvist recorded five top-10 finishes, and crossed the $3 million mark in career earnings after a T11 finish at the U.S. Women’s Open. Nordqvist, currently No. 5 in the Race to CME Globe, is up against previously announced Stacy Lewis, Michelle Wie, and Lydia Ko in the race for the top spot.

“With the announcement of the contract extension from our title sponsor Manulife, along with the support by the local community, and the competitive field we are able to attract, I am confident that this tournament will be a memorable one,” says Manulife Financial LPGA Classic Tournament Director Richard Kuypers.