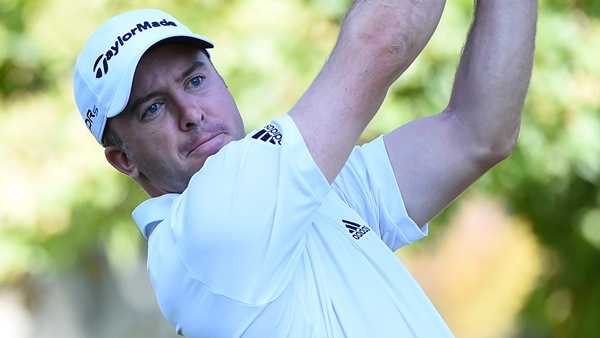 NAPA, Calif. – Martin Laird wasn’t sure what to expect out of his game after a seven-week break. He hasn’t found too much wrong after two rounds of the Frys.com Open.

Laird bounced back from his first bogey of the new PGA Tour season by running off four straight birdies around the turn. One last birdie on the par-5 18th at Silverado gave him a second straight 5-under 67 and a one-shot lead over Bae Sang-moon and Zach Blair going into the weekend.

Blair was among 11 rookies to make the cut in their debut as PGA Tour members. Among those rookies was Canada’s Adam Hadwin, who is tied for 12th at at 5-under 139.

Silverado hadn’t hosted a PGA Tour event since 1980, and it appeared the players were starting to figure out how to navigate the tight, winding fairways and small greens that are all about being on the right side of the hole.

There were 13 rounds at 67 or better, compared with only three in the opening round.

One of them belonged to Jimmy Walker, one of four players fresh off the Ryder Cup who came to the Frys.com Open. Walker opened with a 75, and then he followed that with eight birdies in a round of 66 that got him to the weekend with room to spare.

Hunter Mahan and Matt Kuchar each had a 68 and were at least in range of Laird. Lee Westwood played in the morning through a marine layer that made conditions more difficult. He shot a 69 to make the cut by one shot.

“You never know how you’re going to play after seven weeks off like I had,” Laird said. “Just to come out and put back-to-back 67s up and play very solid – very solid 67s – I’m extremely happy.”

He made a sloppy bogey on the sixth hole with a poor tee shot into the bunker, hitting into another bunker some 80 feet from the flag and missing an 8-foot putt. He had to scramble for par on the next hole, and then he took off.

After a pair of short birdie putts, Laird rolled in a birdie from 20 feet on No. 10, and then made another birdie putt from the same range up the ridge toward a tucked pin on the par-3 11th.

Blair finished second in the final Web.com Tour Finals event to get his card, and kept right on rolling at Silverado. He had six birdies against no bogeys, picking up four shots on his final nine holes to get within one shot of the lead.

Scott Langley, in his first event since his wife gave birth to their first child, had a 66 and was at 8-under 136, along with David Lingmerth and Mark Hubbard, who had a hole-in-one on the seventh hole on his way to a 65.

Laird had more time off than he wanted. A three-time winner on the PGA Tour, he felt his game slipping away when he went back to swing coach Mark McCann and started putting the pieces back together. It was too late to salvage his season. Laird wound up at No. 127 in the FedEx Cup standings – missing by 13 points – and had a month off.

There also were two open weeks around the Ryder Cup in his native Scotland.

When he met with McCann during his break to keep working on his game, the swing was in such good shape that they spent the majority of time working on his short game. That much was evident when he missed the green on the par-3 seventh hole and hit a tricky pitch to 6 feet for par, and on the 18th with a wedge from the first cut that spun back a few feet from the cup.

“I’ve definitely seen it this week,” Laird said of the short-game work. “I’m putting good. My wedge game was pretty bad last year, and we really worked on that. My shot on the last … it’s nice when you do the hard work and then you hit a wedge shot on the last hole to tap-in range almost. It makes it worthwhile.”

Jarrod Lyle, who earned a spot through Monday qualifying, had a 70 to make the cut in his first PGA Tour event since he had a recurrence of leukemia nearly two years ago.