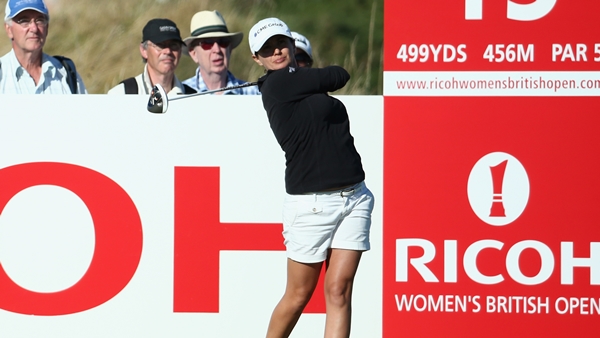 SOUTHPORT, England – Mo Martin had a plan for Royal Birkdale, and it’s working better than she imagined at the Ricoh Women’s British Open.

Martin took two putts from short of the green on the par-5 18th hole Friday for her 10th birdie in two rounds, and her second straight 3-under 69. That gave the American a three-shot lead over Beatriz Recari of Spain and former U.S. Women’s Open champion So Yeon Ryu going into the weekend.

“It’s always nice when your plan pans out,” Martin said. “So it’s fun to be here.”

For Michelle Wie, it was fun while it lasted

Coming off her first major in the U.S. Women’s Open at Pinehurst No. 2, Wie kept putting herself in tough spots and couldn’t convert enough pars. She followed her highest score of the year (75) with one that was even worse, a 78 to miss the cut by three shots.

Wie was among the favourites. It was easy to overlook the 31-year-old Martin, who has never won an LPGA Tour event and is playing links golf for only the third time.

She is 5-foot-2 and among the shortest hitters in women’s golf. That figured into her strategy at Royal Birkdale, which is littered with pot bunkers and is framed by dunes covered in thick grass.

She made it sound so simple, even as Royal Birkdale has been plenty tough in pristine weather for these parts _ a steady wind, but not as strong as it could be.

Martin was at 6-under 138, one of only two players to break par in both rounds.

Ryu was the other, overcoming a double bogey on her second hole by not dropping a shot the rest of the way. She shot 70 and was at 3-under 141. Recari, who arrived at Birkdale with a sore wrist that she attributed to no one helping her carry her luggage in the airport, birdied the last three holes for a 67.

Ahn Sun-Ju also had six birdies in a round of 67 that left her one shot behind at 2-under 142, along with Julieta Granada (70). Only nine players were under par when the cut was made at 6-over 150.

The accuracy of Martin has been critical, for it doesn’t take much to get out of position at Royal Birkdale, and escaping is never easy.

Ayako Uehara, the first-round leader with a 68, shot a 44 on the back nine for a 79 and fell nine shots behind. And then there was Lexi Thompson, the Kraft Nabisco winner, who began her round by hitting two shots out of bounds and making a 10. Thompson fought back for a 77.

The second round offered a few amazing shots, none that tops the one by Vikki Laing of Scotland. She holed out with a 5-wood from 240 yards for a double eagle on the par-5 17th.

Wie was on the cut line until her tee shot on the 16th went right into a blackberry bush. She was inches away from asking for a free drop from a plaque in the ground, but instead had to take a penalty drop and made double bogey. She was too disgusted to read the plaque _ it was there in honour of Arnold Palmer, who in 1961 slashed a 6-iron out of the bush and onto the green on his way to his first British Open title.

“That didn’t happen for me,” Wie said with a smile.

Through it all, mighty Mo just motored along without much fanfare. The UCLA grad played bogey-free on the front nine with two birdies. And when she got in trouble with back-to-back bogeys, she chalked that up to a good plan with poor execution. And then it was back to work.

She hit a soft wedge from 71 yards to tap-in range for birdie on the par-5 15th, and then added her third birdie on a par 5 at the last hole.

Martin has won three times on the secondary Futures Tour. She had a plan for those courses, too. The real test comes this weekend, with a major title at stake and experienced players behind her.

One of them is Ryu, who has played enough big events to know that bad things can happen to everyone. For Ryu, it was a double bogey on the second hole.

“Links golf is always hard to predict,” Ryu said. “Even when I hit the great shots, still can finish at the worst place. And when I hit the bad shots, still can finish close to the pin. So it’s really important, whatever the result, we need to accept it and just keep working. Today I made a double bogey on the second hole, but I knew it was just unlucky. I just accepted it and then think about next holes, and it helped a lot.”

Canada’s Alena Sharp made a timely birdie on hole No. 17 today to get to 6-over for the championship and make the cut on the number.