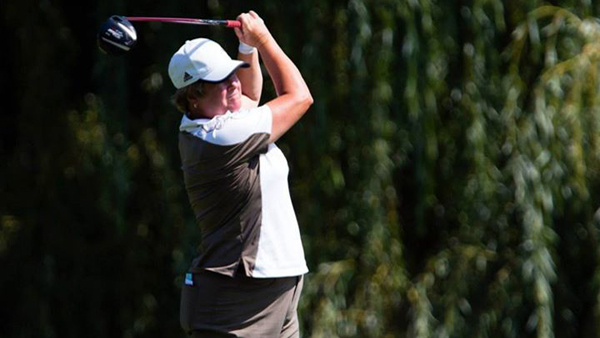 Sherbrooke, Qué. (Golf Canada) – Mary Ann Hayward of Aurora, Ont. held onto her opening round lead in the second round of play on Wednesday at the Canadian Women’s Senior Championship, hosted by Club de golf Milby in Sherbrooke, Qué. Her second round score of 2-under 71 puts her seven strokes ahead of Pincourt, Qué.’s Helene Chartrand, who sits at even-par for the tournament.“I felt good going into today’s round,” said Hayward. “It’s a very demanding course so you can’t take much for granted out there. I just wanted to have another good ball-striking day.”The three-time champion is looking for her fourth win, which would earn her an exemption into the 2014 U.S. Women’s Senior. Hayward was a semifinalist in the international event in 2010. She will enter Thursday’s third and final round with a combined score of 5-under 141 for the tournament. “My game plan is the same for tomorrow,” Hayward said. “The key to this course is just keeping it on the right side of the hole.”In the Inter-Provincial Team Competition, which is contested over the first 36 holes of the competition, the Team Ontario contingent of Hayward, Judith Allan-Kyrinis of Thornhill, Ont., and Ivy Steinberg of Stouffville, Ont. claimed the 2014 title with a total combined score of even-par 294. Team Québec’s squad of Marie-Therese Torti of Candiac, Qué., Marlene Desbiens of Clermont, Qué., and Susan Pearl of Ottawa, grabbed the runner-up spot with a final score of 6-over 310. Nova Scotia’s Ruth Maxwell of Dartmouth claimed the Super Senior (60+) title, also contested over the first 36 holes of the tournament. Maxwell grabbed first place in the division by one stroke with a combined score of 8-over 154, Teri deLuis of Brockville, Ont. and Holly Horwood of Vancouver shared second place in the division at 9-over for the championship. Starting times, post-round results, full field list, and live scoring are available here.