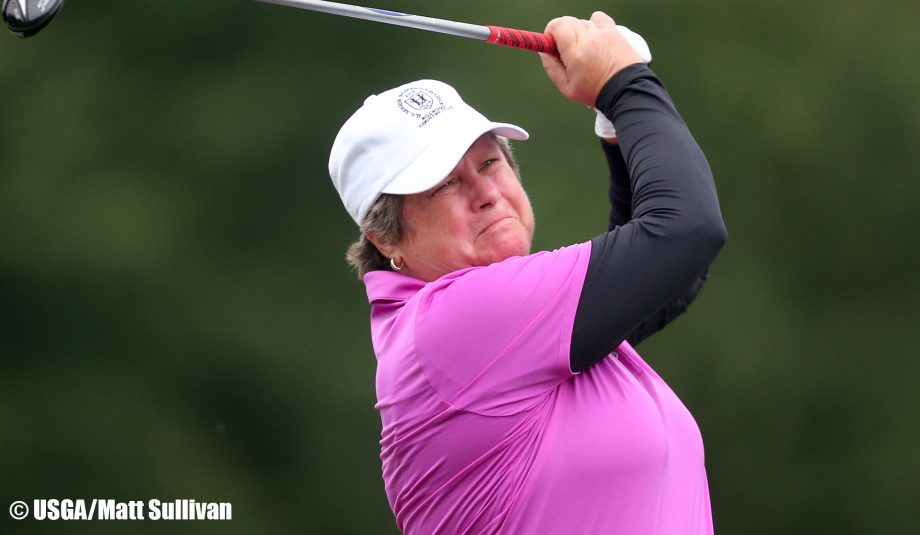 Hayward, 55, carded four birdies and four bogeys during Sunday’s second round of stroke play for an even-par 72, following Saturday’s 1-over 73. This marks the second time Hayward has been the stroke-play medalist at a USGA championship, joining the 1998 U.S. Women’s Mid-Amateur.

“I played a little better than yesterday. I don’t think I had a three-putt today, which is good,” said Hayward, who manages the sports development program for the Golf Association of Ontario. “The pins were tough today. You just had to pick your spots, and I think I did a pretty good job of that.”

Martha Leach, 53, of Hebron, Ky., finished solo second at 3-over 147. Leach, who carded a 1-over 73 on Saturday, played her first 13 holes at 1 over par. However, a string of three disappointing bogeys over her last five holes dropped her to a 2-over 74 for Sunday.

“I’m not thrilled about the way I finished,” said Leach, a realtor and part-time substitute teacher. “I think I need to go to the driving range and putt some. I like to be hitting the ball really well going (into match play) to get that confidence.”

Caryn Wilson, 54, of Rancho Mirage, Calif., earned the third seed at 5-over 149. Wilson, a former professional tennis player, survived what she termed a “roller-coaster” day that featured three birdies, three bogeys and one triple bogey en route to a 3-over 75.

“I just kind of checked out in the middle,” said Wilson, who reached the semifinals of the 2013 Senior Women’s Amateur. “I was feeling a little wonky today. I think I got out there and I hadn’t eaten much and I hacked around.”

First-round leader Ginny Burkey, 60, of Eugene, Ore., followed Saturday’s even-par round with a difficult 9-over 81 on Sunday, a round that included six bogeys and one triple bogey. However, her two-day total of 9-over 153 earned her a tie for 12th and easily moved her into the match-play portion of the championship.

For the third consecutive year, the 36 holes of stroke play concluded with exactly 64 players advancing to the match-play bracket. No playoff was needed to determine any match-play berths.

The 2015 U.S. Senior Women’s Amateur Championship is open to female amateur golfers who reached their 50th birthday on or before Sept. 26, 2015, and have a Handicap Index® not exceeding 18.4. It consists of 36 holes of stroke play followed by six rounds of match play, with the championship scheduled to conclude with an 18-hole final on Thursday, Oct. 1.

The U.S. Senior Women’s Amateur Championship is one of 13 national championship conducted annually by the United States Golf Association, 10 of which are strictly for amateurs.

Tournament results can be found here.