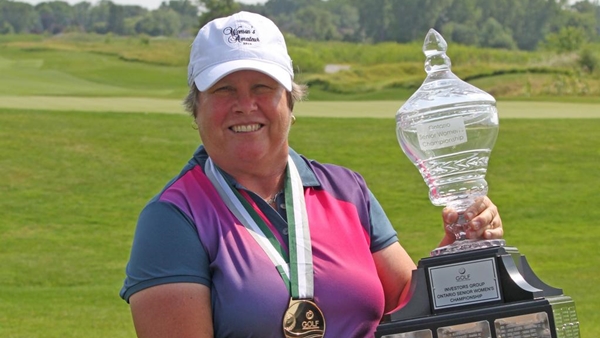 WINDSOR, Ont. – Aurora’s Mary Ann Hayward will have her name engraved on the Investors Group Ontario Senior Women’s Amateur Championship trophy a fourth time, after winning her second consecutive title at the event 2014 edition of the event which took place at Ambassador Golf Club in Windsor.

The North Halton member entered the final round with a five-shot lead and would save her best for the last day. The Canadian, Ontario and Quebec Golf Hall of Famer would finish the day six-under (66) and end the tournament at seven-under to win comfortably by 12 shots.

“I wasn’t really thinking of the number of times or back-to-back, I think just shooting 66 today is what I am going to remember from this,” said Hayward after the round.

It was obvious the 54-year-old was on her game during the round, as she began the day with three-straight birdies. She did have back-to-back bogeys on the fifth and sixth holes, but was able to settle down after that. She birdied the ninth and then added four more on the back nine, including one on No. 18 that brought the gallery to their feet as she clinched the title.

After the round, Hayward thanked her caddie, Dave Mulholland, for keeping her calm after her mistakes.

“Dave is a great guy,” she said. “He is always encouraging me – just telling me ‘you’re good, just calm down’. I tend to beat myself up a little bit, so he just reels me back in.”

Her play throughout the week was spot on, but Hayward said it was her ball-striking and final-round putting that were the best parts of her game.

“The ball-striking was pretty good all three days,” she added. “The putter comes and goes, but today it was unbelievable. I think I made almost every birdie putt I had.”

Finishing in second spot was Whitevale Golf Club member and Uxbridge resident Gail Pimm. Pimm was the only other player to finish the round under par at one-under (71) for the round. She finished the tournament at five-over.

Picking up the bronze medal was Thornhill resident and Thornhill Golf and Country Club member Judith Kyrinis who carded a final round at two-over (74) finishing the tournament at six-over.  Etobicoke’s Terrill Samuel, nine-over, and Stouffville’s Ivy Steinberg, 14-over, rounded out the top five.

Hayward, along with Kyrinis and Steinberg will all represent Ontario in the inter-provincial competition at the Canadian Senior Women’s Championship, Aug. 19-21 at the Milby Golf Club in Sherbrooke, Que.

The 60+ division winner was Sue Postian, from London and the Sunningdale Golf Club who finished the tournament 19-over. The 70+ division was won by Ellen Horton, from Collingwood and the Blue Mountain Golf & Country Club, at 54-over for the tournament.

The Ada Mackenzie Matches Team was also announced after the final round. The matches are a team-competition between Ontario and New York State in the spring of 2015. The team members are: Hayward, Pimm, Kyrinis, Steinberg, Lynn Morrison, Andrea Blackwell, Marion Reid, Jane Hedges-Morrison, Postian and Sarah-Anne Smurlick.