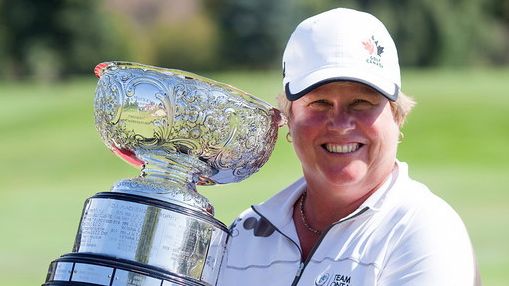 The victory marks Hayward’s third Royale Cup Canadian Women’s Senior title in four years, as she previously won the championship in 2010 and 2011.

“It feels great, it’s always a tough field so a win is never a sure thing.” said Hayward. “You prepare hard and you put a lot of work into getting your game to a level to be in contention to win so it feels very satisfying.”

Hayward’s even par 213 (75-67-71) 54-hole score gave her a five-stroke victory over runner-up Alison Murdoch of Victoria, B.C. Hayward carded a final round even par 71 on Thursday that was highlighted by three birdies and an eagle on the par-5 11th hole.

“I putted a little more conservatively today because I wasn’t worried about making a charge,” she continued. “I just struck the ball well enough to win.”

“They are both great champions and we had a lot of fun out there,” Hayward said about her pairing.

Hayward was inducted into the Canadian Golf Hall of Fame in 2007. Earlier this year she captured her third Investors Group Ontario Senior Women’s Amateur title. With the national win, Hayward earns an exemption into the 2013 USGA Senior Women’s Amateur Championship contested September 21-26 at CordeValle Golf Club in San Martin, Calif.

Murdoch, who earlier this year was inducted into the Canadian Golf Hall of Fame, finished in second place at 5-over 218 (74-72-72) after firing a second consecutive 1-over 72. She also took home the Super Senior division title (60+) after Wednesday’s second round.