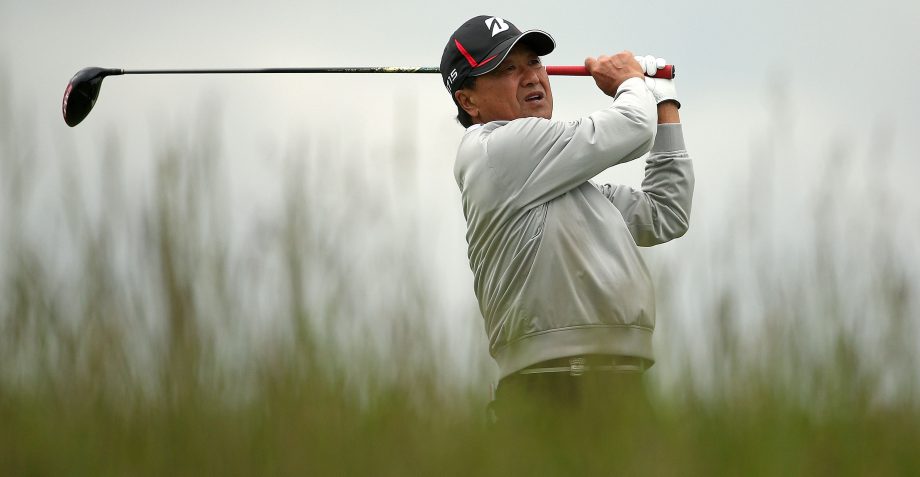 “If I’m going to hit straight and hit the fairway, I can play 2 over, 3 over. I tried to play 1 over front nine, 1 over back nine,” he said, grinning, with both index fingers upraised.

Kuramoto did even better than that Thursday in the first round of the Senior PGA Championship.

Defending champion Colin Montgomerie, Billy Andrade, Barry Lane, Jean Francois Remesy and Bart Bryant were a shot back. Bernhard Langer, Tom Lehman and Scott Verplank were in the large group at 73 on a difficult day for golf.

The temperature was in the upper 40s for the early starters and it crept only to 60 as the sun finally broke through in late afternoon. Sweaters and rain jackets were the uniform of the day and scoring on the rugged Dye Course’s twisting fairways and small greens did not come easily.

With 17 major champions and seven World Golf Hall of Fame members in the field of 156 players, only 30 shot 74 or better.

“We’re old,” said Andrade, an early starter. “We’re old guys. When it gets cold, maybe we don’t hit it as far and as well. It’s a survival test.”

“It felt like a British Open,” he said after scattering eight bogeys in an 80. “It’s cold. It starts to rain. There’s nowhere to miss the ball on this course.”

Andrade and Montgomerie sat atop the leaderboard nearly all day and they were more than content. It was a day for precision and patience. Montgomerie compared it to the rigors of a U.S. Open.

The 59-year-old Kuramoto won 30 times on the Japan Tour, the second-most in that tour’s history. He tied for fourth in the 1982 British Open.

But he’s now chairman of the PGA of Japan. He has no time for practice. He plays only on the side, something he does well enough to have won the Japan Senior Open and one other event while competing in 11 Japan Senior Tour events in 2014.

He hit eight of 11 fairways and 11 greens in regulation Thursday, but scrambled to save par six of seven opportunities. He countered two bogeys with three birdies.

“I don’t have the confidence at all,” Kuramoto said through an interpreter, wife Margie. “So I don’t think that I’m going to be able to keep the lead.”

Weather conditions are expected to ease. The predicted high is in the low 70s for Friday’s second round, climbing toward the low 80s by Sunday.

The challenge will remain.

The Dye Course is situated on a tall hilltop with Hoosier National Forest falling away in all directions. Its fairways plunge and soar over sharp slopes and afford all manner of risky shots and awkward lies. Its small greens are difficult targets and a poorly placed shot can roll off and well away.

The Senior PGA Championship is coming off venues that over the past three years permitted the lowest scoring in tournament history. The field averaged 73.040 for four rounds at Harbor Shores in Benton Harbor, Michigan, in 2012. The number was 72.78 at Bellerive Country Club in St. Louis in 2013, and 73.018 back at Harbor Shores last year.

The field averaged 77.73 for the first round Thursday. There were 56 scores of 80 or higher.

Six players reached 2 under. None could hold on.

“Normally, I would be angry because I finished level par,” said one of them, Remesy, a Frenchman in his second season as a senior. “But I’m pleased to be here and pleased to be in contention.”

Three Canadians are in the field this week. Rod Spittle opened with a 5 over 77, Rick Gibson had a 78 and was 6 over, while Jim Rutledge carded a 79 to sit 7 over.