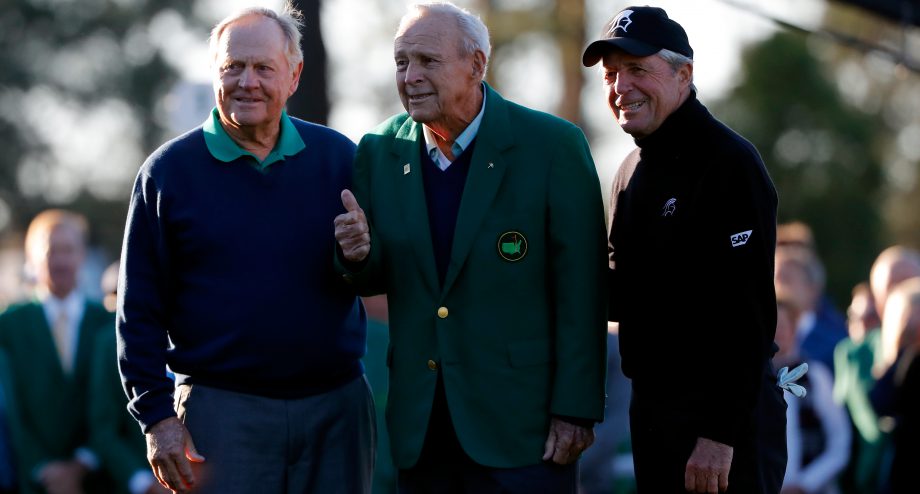 AUGUSTA, Ga. – The Masters is underway after a pair of ceremonial tee shots from Jack Nicklaus and Gary Player.

Fifteen minutes after the ceremony, the tournament began for real with Jim Herman and Steven Bowditch going off in the first group on a sunny, brisk morning at Augusta National, the course dampened by overnight thunderstorms.

Herman made a birdie on the first hole to put his name atop the leaderboard, sure quite a thrill for the 38-year-old journeyman playing in his first Masters. He was the last player to qualify for the tournament, getting in with his victory last weekend at Houston.

The most meaningful start to this Masters was a ceremonial tee shot that wasn’t even hit.

Arnold Palmer was on the tee Thursday morning.

Palmer, the four-time Masters champion known in the golfing world simply as “The King,” rode a cart out to the first tee at Augusta National, offering that familiar wink and a thumbs-up. He watched Jack Nicklaus and Gary Player hit their shots to officially begin the 80th Masters.

The 86-year-old has slowed significantly and struggles with his balance. He said last month he would not be hitting a tee shot.

Masters chairman Billy Payne introduced him as “not driving this year, but forever a part of Masters tradition.”

“I think he was delighted to be out there,” Nicklaus said. “I think we were delighted to have him there. I think Gary and I felt it was more about Arnold this morning than anything else, and I think that was just fine.”

Player, the 80-year-old South African who said he prepared by doing 1,300 sit-ups and crunches, belted his drive down the middle. Nicklaus, who 30 years ago this week became the oldest Masters champion at 46 when he won his sixth green jacket, hit it high and shorter than Player.

“Gary won his tournament this year,” Nicklaus said with a grin. “I hit a pop-up.”

“I wouldn’t be too concerned about me outdriving you too much, because you did it to me for 50 damn years,” Player said to Nicklaus.

There was plenty of levity, as usual, for the original “Big Three.” Rivals and lifelong friends, they combined to win seven straight Masters during the 1960s and collectively have won 34 major championships.

Even so, this moment was all about Palmer.

The King dislocated his right shoulder in December 2014 and still was determined to get to the first tee at Augusta National. This year, he couldn’t make that happen. Last month, he chose not to hold his press conference at the Arnold Palmer Invitational, did a taped segment for the broadcast and seen only in a cart watching his grandson, PGA Tour player Sam Saunders.

He walked out of the clubhouse on a crisp Thursday morning in his green jacket, holding onto the arm of Buzzy Johnson, the senior director of the Masters. His steps were short and choppy as he was helped into a cart. His face came to life when he looked out a corridor of fans leading to the first tee. The affection hasn’t changed after all these years.

“To have longevity has been a special gift,” Player said. “And to come here today and to be on the tee with Arnold being a part of us, it was gratifying and sad, because everything shall pass. But it was nice to have him on the tee. I dedicated my first tee shot to him in respect. It’s a very special moment.”

Nicklaus asked Palmer to play with him in the Jamboree last month, a members-only event at the club. Nicklaus and Palmer are the only Masters champions who also are members of Augusta National. Nicklaus said Palmer wanted to join him except that it was the week of Bay Hill.

And then on Tuesday night at the Champions Dinner, Nicklaus made one last pitch.

“I think he would have preferred to hit a golf ball,” Nicklaus said. “I talked to him at the Masters dinner. I said, ‘Arnold, when you’re out there, what if we just take you up and had you hit … I don’t care if you putt it off the tee. I think everybody would love to have you do anything.'”

He said Palmer told him he would think about, and Nicklaus checked back with Thursday morning.

“He said, ‘I’m good.’ I said, ‘Fine, let’s leave it alone.’ So I think it probably was the right thing,” Nicklaus said. “Arnold’s balance is not good, and that’s what they were worried about.”