Masters memories not just about golf for Palmer 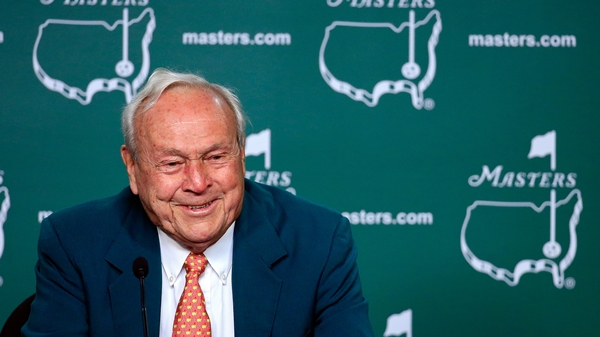 AUGUSTA, Ga. – The memories at the Masters aren’t just about golf for Arnold Palmer.

He rolls off names from the past as if he had just seen them earlier in the day. He can tell you not only how many people were at the champions’ dinners in the 1960s, but who they were and maybe even where they sat.

Names like Nicklaus, Hogan and Snead, of course. But Ralph Guldahl and Horton Smith get almost equal billing, even if their names have been lost to most somewhere in golf history.

Palmer even remembers the real name of his first caddie at the Masters 59 years ago. Nathaniel Avery went by the nickname Iron Man, and he helped the young Palmer to a 10th-place finish.

“He was great and told me where to go and what to do, and that was the end of it,” Palmer said.

Ask him about Bobby Jones, though, and he really perks up. If Palmer is a link for most to the past at Augusta National, the great amateur champion and Masters co-founder is his own personal link to the days the tournament began.

“I know a lot about him; a lot of you people in this room have no idea how much I know about him,” Palmer said Tuesday. “He was a great guy and I revere the thought that I had the opportunity after reading, when I started reading about him about 12 years old, reading about him and what he did; and then being here at Augusta and having drinks with him, shaking hands with him, talking to him about the game and what he thought of the game.”

Jones’ putting stroke was one Palmer admired, even dreamed of.

“I can occasionally think of sleeping and waking up in the middle of the night and watching him putt, and thinking about how smooth he was and how good he did the things he did on the golf course,” Palmer said. “And that pleases me.”

At the age of 84, Palmer also is pleased to be back at the Masters. He first played here in 1955, winning $696, more than enough to gas up the car and tow the trailer he shared with his wife on to the next tournament stop.

He won the green jacket four times, and this year’s Masters is the 50th anniversary of his last win. He thought he would win more and win other majors, but it was the last big win of his career.

Looking back, Palmer believes winning the Masters four times in a space of seven years may have satisfied him too much. The extra gear just wasn’t there after that, though it was hard to figure out at the time.

“It may have caused a letdown and caused me more than I had anticipated,” Palmer said. “Had I had the same driving desire to win before, I might have won a few more Masters or a few more Opens or a couple PGAs, who knows. Psychologically, it affected me.”

Palmer, who will be the subject of an exhaustive three-night documentary beginning Sunday on the Golf Channel, said Tiger Woods might be struggling with the same thing.