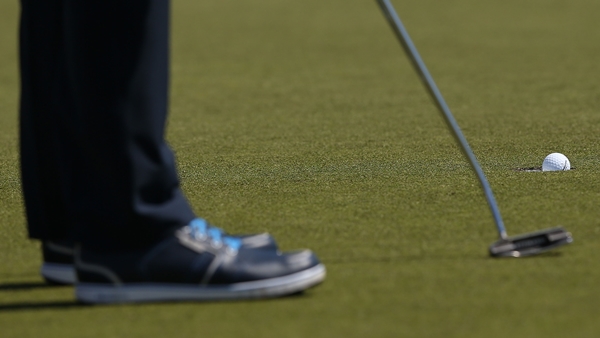 During the opening-round of the 2014 WGC – Accenture Match Play Championship, Matt Kuchar found himself in good position to close out his opponent, Bernd Wiesberger, on the 14th hole. Kuchar dialed-in a 14-foot putt for what looked like the win (5&4) over Wiesberger, however some discussion ensued as to whether or not Kuchar had replaced his ball mark in the correct location.

Golf Channel’s Rex Hoggard outlines some of the commentary that occurred between each of the sides and their respective caddies here.

From the video below, you’ll see that following Kuchar holing out, a preceding highlight shows that he had originally marked the position of his ball in a different location as it would potentially interfere with Wiesberger’s next stroke.

Under Rule 20-1 (Lifting and Marking), Kuchar’s ball may be lifted and his ball-marker may be moved to further accommodate his opponent’s play.  However it must be replaced, with the process of marking reversed, before he plays his next stroke.

Upon realizing the error, it is clear that Kuchar has played from a wrong place.

In this situation Kuchar was proceeding under Rule 20-1 (Lifting and Marking), so application of the Rule and subsequent penalty falls under 20-1.

It is important to note that the last sentence under the Note to Rule 20-1 states in part that “… If the ball-marker interferes with the play, stance or stroke of another player, it should be place one or more clubhead-lengths to one side.”  In order to replace the ball when this has been done, the procedure must be reversed, as prescribed by Decision 20-1/16.

In the end, Kuchar found himself in a loss of hole situation as a result of an honest mistake.  The error in neglecting to replace his ball resulted in the match being extended to the 16th hole, before Kuchar closed with a 3&2 win.

Since the WGC-Accenture Match Play Championship kicked-off last week, Golf Canada (@TheGolfCanada) conducted a poll via Twitter and Facebook asking ‘What form of play do you prefer?’  Stroke Play was the leading favorite amongst those who participated when this blog was published.

What’s your favorite form of play? Have your say in our poll below.

What form of play do you prefer?

Have a Rules of Golf question you want answered in a Rules & Rants Blog?  Let us know here.