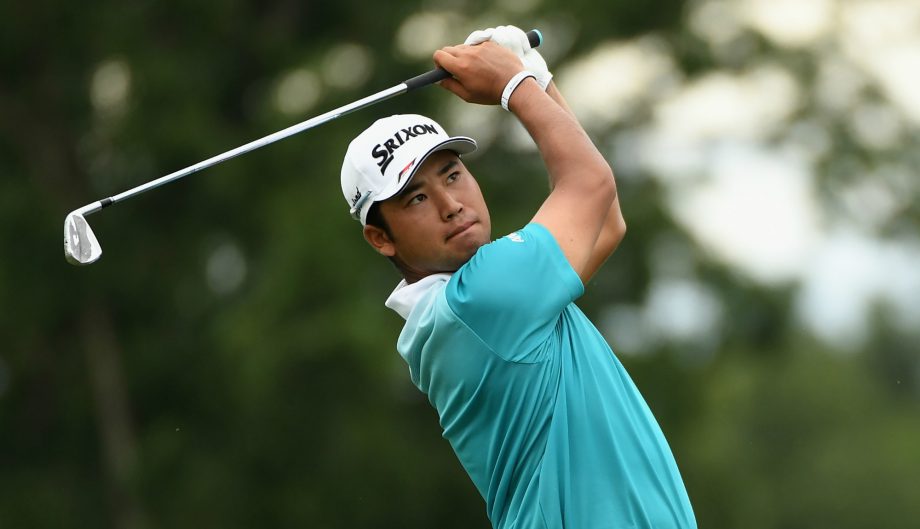 Hideki Matsuyama never looks satisfied with his shots or his score, no matter how good they look.

Perhaps it will take winning a major to change that.

Five days after the 25-year-old Japanese star closed with a 61 to win his second World Golf Championship, Matsuyama motored through a dampened Quail Hollow with a 7-under 64 that gave him a share of the lead with Kevin Kisner (67) in the PGA Championship.

They were at 8-under 134, all but ending the hopes of Jordan Spieth to get the career Grand Slam this year.

Heavy rain that suspended play Friday afternoon made Quail Hollow more vulnerable than it has been all week, only Spieth couldn’t take advantage. He made only one birdie, finished with a bogey, and shot a 73 to finish 11 shots out of the lead.

“I kind of accept the fact that I’m essentially out of this tournament pending some form of crazy stuff the next couple of days,” Spieth said.

Kisner faced tougher, faster conditions in the morning and holed a 50-foot eagle putt from short of the green on the par-5 seventh hole. When his round was over, Kisner had a five-shot lead over the players from his side of the draw.

It didn’t look as though anyone would get close.

“These guys going out this afternoon, they break 70, they’ve done a hell of a job,” Rory McIlroy said after a 73 that put him 10 shots back.

A light rain began falling not long after McIlroy’s prediction.

Then, the storms rolled in with heavy rain that drenched the course and forced a rain delay of 1 hour, 43 minutes. And when the second round resumed, it felt like an entirely different golf course.

Jason Day, who played a four-hole stretch in 5 under around the turn and before the storms, began smashing driver without regard that it might run through the fairways and into the rough. He shot 66 and was two shots behind.

There were pitch marks on the putting surfaces. There were splotches of mud of the sides of golf balls. But the biggest difference was the rain took the fear out of putting on the fast, frightening greens and sent scores tumbling.

Francesco Molinari also shot a 64 and was at 5-under 137, along with Louis Oosthuizen, who had a 67.

Graham DeLaet (73) of Weyburn, Sask., was the low Canadian and likely the only one to make the projected 5-over cutline as he finished the round tied for 23rd at 1-over par. Mackenzie Hughes (72) of Dundas, Ont., was 8 over and Adam Hadwin (76) of Abbotsford, B.C., was 13 over.

Matsuyama, finishing his swing with one hand as tee shots found the fairway, already was playing great and putting even better. The storm delay did not stop him.

He ran off four straight birdies starting on No. 12 when he hit his approach into 12 feet. That was the longest of his seven birdie putts, though he also made a 20-foot par putt on the ninth hole. When the round resumed, Matsuyama got up-and-down for birdie on the 15th, saved par from a bunker on the 16th and then drilled a 7-iron over the bunker to 7 feet for birdie on the par-3 17th.

He had a putt just over 12 feet for birdie on the 18th that would have tied the PGA Championship record of 63, but it missed to the left.

No matter. He was tied going into the weekend, raising Japanese hopes of its first major championship.

The second round was halted by darkness, leaving 26 players who had to return Saturday morning. That included Chris Stroud, who was 5 under and had five holes remaining.

Kisner doesn’t have the length for this 7,600-yard course, but he has golf smarts, a reliable swing and a good putting stroke for the greens. He saw the changes to the course earlier this year on a soft, damp day and wondered how he would manage.

The plan was to make birdie on the par 5s and the two short par 4s, and play for par everywhere else.