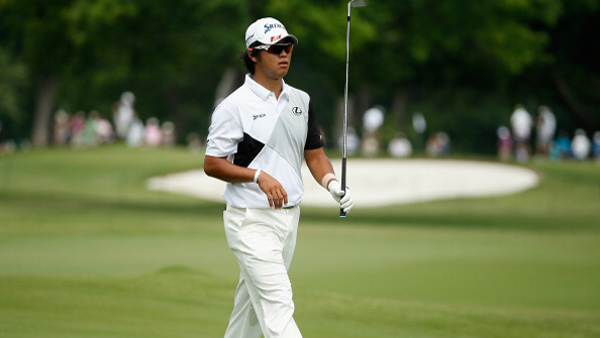 David Toms, Hideki Matsuyama, Chad Campbell and Chris Stroud shared the third-round lead at 7-under 203 on Saturday at Colonial, where plenty of others also are in contention.

There were 13 players within two strokes of the leading quartet.

The closest chasers included Adam Scott, the No. 1 player in the world, and Jimmy Walker, a three-time winner this season and No. 1 in the FedEx Cup standings.

Kevin Chappell, whose early 7-under 63 was the low round of the day, moved from a tie for 60th to within one stroke of the lead.

Walker was 6 under after a 69, and Scott was another stroke back after a 66.

Walker and Campbell were playing together, and were tied for the lead at 8 under before both bogeyed the 161-yard 13th hole.

When Walker missed a 9-footer, it was his first bogey this week at Hogan’s Alley – and he had another two holes later when hitting from two greenside bunkers. Campbell held the lead alone only for a moment before missing his 4-foot par chance at No. 13.

They were on the 18th hole when play was suspended 1 hour, 8 minutes because of an approaching thunderstorm that brought only a brief downpour.

Walker saved par on the final hole after his drive settled near the edge of the water and he hit with an awkward stance into a greenside bunker. He blasted to 8 feet and made the putt.

Scott, who overtook injured Tiger Woods at No. 1 this week, started the round tied for 36th in the same group with Matsuyama. Chappell had to make a 6-foot par putt on his last hole Friday just to make the cut at 1 over, but quickly made up ground in his early-morning third round.

Second-round leader Brice Garnett fell back with a bogey at the 216-yard fourth hole, followed by a double bogey when he drove out of bounds at the tight fifth hole that runs parallel to the Trinity River. The PGA Tour rookie shot 74 and dropped into a tie for 25th at 3 under.

Matsuyama had three early birdies, including at Nos. 4 and 5 – the last two of a trio of holes known as the “Horrible Horseshoe” because of the layout of difficulty of the holes. There are two difficult par 4s with the course’s longest par 3 between them.

“Kind of set the tone for the rest of the round,” Matsuyama said through an interpreter.

To stay No. 1 for more than a week, Scott likely has to finish higher at Colonial than third-ranked Henrik Stenson does at Wentworth. Stenson was tied for seventh going into Sunday’s final round in Europe’s flagship event, though he was nine strokes off the lead. Scott was tied for 11th at Colonial, but only two back.

Since four bogeys in his first nine holes this week, Scott has had only one bogey his last 45 holes. He was bogey-free Saturday with his only four birdies his first eight holes. At the lone par 5 on the back nine, Scott hit his approach in a greenside bunker at No. 11 before blasting to about 6 feet, only to miss the birdie chance.

Graham DeLaet carded 68 to tie for 25th at the close of round 3 and David Hearn shot 74 tand will begin the final round tied for 56th.