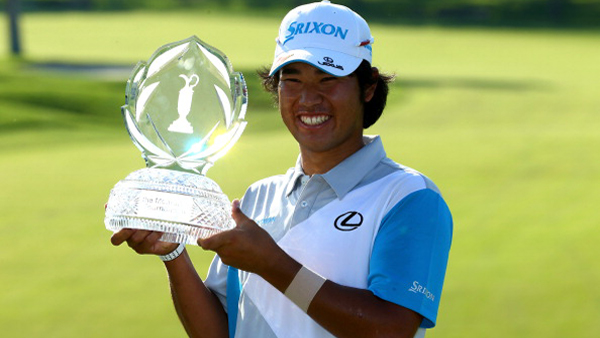 DUBLIN, Ohio – Hideki Matsuyama made two huge mistakes coming down the stretch – and still walked away with a smile.

Matsuyama muscled his way into a playoff with a clutch birdie on the 18th hole, then beat Kevin Na with a par on the first playoff hole to win the Memorial Tournament on Sunday.

It was a victory that could mark the 22-year-old from Ehime, Japan, as the next big thing in international golf. He won in the elite event hosted and founded by Jack Nicklaus and played on his Muirfield Village layout. Nicklaus was also 22 when he broke through as a pro.

“To win my first PGA Tour event is enough, but to win it here at Mr. Nicklaus’ course, it really gives me a lot of confidence going (forward),” Matsuyama said through an interpreter. “Hopefully I’ll be able to use this week as a steppingstone to further my career.”

High drama unfolded over the last five holes with Bubba Watson, who won the Masters in April and should be among the favorites at the U.S. Open in 10 days, ahead of the pack.

Adam Scott, who won the Masters in 2013, was tied with Watson for the lead before hitting into the pond in front of the signature, par-3 12th, making double bogey. He made three more bogeys, costing him a follow-up to his win last week at Colonial.

Watson hit two wayward drives – one at the par-4 14th and another at the reachable par-5 15th – that turned the tournament into a free-for-all. The first resulted in a bogey that dropped him into a tie for the lead.

The second all but doomed his chances.

“(It was a) bad decision, trying to be a hero,” he said of his hooked rocket that ended up in the backyard of a million-dollar home that backs up to the course.

The double bogey dropped him a shot behind Na, who had completed the day’s low round – an 8-under 64 – about two hours earlier. Na had been relaxing in the clubhouse, two shots out of the lead and behind some of the biggest stars in the game.

Watson’s double opened the door for Matsuyama, who led Na by two strokes as he stepped to the 16th tee, a 201-yard par-3 with a narrow green on the other side of a large lake.

“I knew the wind was coming from the right,” Matsuyama said. “I just hit a bad shot.”

His iron shot plunked into the water a few feet short of the bank in front of the green. He ended up with a double-bogey and was suddenly tied with the idle Na, who instantly headed for the driving range.

Then Matsuyama’s second shot to the 17th hole went through the green and he made bogey.

But he came up big when he absolutely had to. His 313-yard drive on the uphill finishing hole left him 165 yards to the treacherous back pin. After he hit it, he tapped the ground with the driver and the head broke off. He just picked it up and stuffed it in his bag.

His approach ended up 6 feet below the pin. When he drilled it into the heart of the cup, he grabbed a spot in the playoff.

Still, Watson hadn’t been eliminated. He also needed a birdie at the 18th to join the fun. But his chip from the fringe rolled well past.

In the playoff, Na promptly hit his drive on 18 into the creek that runs along the left side of the fairway.

“I overcompensated and pulled it,” he said.

After a drop he hit an iron into heavy rough right and short of the green. From there he chipped on.

Meanwhile, Matsuyama, using his 3-wood instead of a replacement driver, hit into a bunker and then hooked his second into deep rough left of the green. But his flop shot came to rest 10 feet from the hole and he rolled in the speedy putt for the win.

“He hit an unbelievable putt,” Na said. “That was not an easy downhill-sloping putt.”

His first victory on American soil followed Matsuyama’s five wins on the Japan Golf Tour. He finished in the top 10 of two majors a year ago. He also gained valuable experience by playing Muirfield Village in the Presidents Cup last fall, when he was paired with Scott in four matches.

Nicklaus was asked about his tournament’s new champion.

“This young man’s going to win a lot of golf tournaments,” he said. “First one in the United States. Got to start somewhere.”

David Hearn carded 71 Sunday to move up 11 spots and finish the tournament in the group tied for 28th.