Matt Every rallies to win at Bay Hill 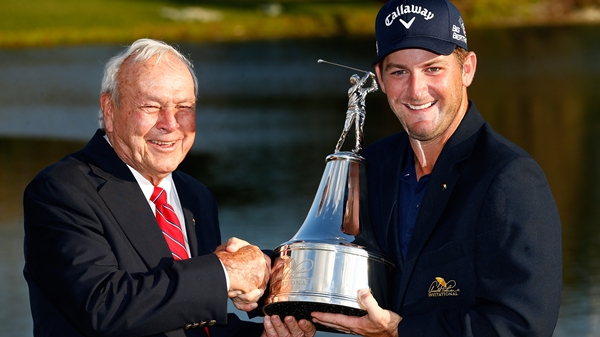 ORLANDO, Fla. – Matt Every always believed he would finally win on the PGA Tour. He couldn’t have imagined it happening Sunday at Bay Hill.

Nine shots out of the lead going into the weekend, still four shots behind Adam Scott going into the final round, Every took advantage of a surprising collapse by the Masters champion and held on to the very end for a 2-under 70 to win the Arnold Palmer Invitational.

Cocky by nature, Every choked back tears when he realized he had won in his 92nd try as a professional.

“It’s hard,” he said, stopping to compose himself. “It’s tough, man. You just never know if it’s going to happen. You get there so many times. It’s nice to get it done.”

Scott, in his final tournament before he defends his title at Augusta National, came undone.

Along with two quick bogeys to start his round, he didn’t make a birdie over the final 14 holes. Nothing summed up his awful day like the par-5 16th, the easiest at Bay Hill. Every made a bogey to fall to 14-under par. Scott, playing behind him in the final group, had a 20-foot eagle putt on the 16th to tie for the lead. He ran it 4 feet by, and then missed that for a three-putt par.

Scott closed with a 76 to finish third. He had to win to reach No. 1 when he arrived at the Masters. Now, the No. 1 spot held by Tiger Woods for the last year will be up for grabs at Augusta among Woods, Scott and Henrik Stenson, who tied for fifth at Bay Hill.

Every grew up about 90 minutes away in Daytona Beach. This was the first PGA Tour event he attended as a kid, coming with his father to watch Mark Calcavecchia, his favorite player. After a wild final hour, Every donned the blue blazer on the 18th green and had an audience with The King – tournament host Arnold Palmer.

“I kept telling myself, `Maybe it’s going to be somewhere special,'” Every said about going for his first win. “This is really cool. I still can’t believe it.”

Every finished at 13-under 275, one shot ahead of Bradley, who needed two late birdies for a 72.

Until Sunday, about the only time Every made news on the PGA Tour was when he was arrested and jailed on a misdemeanor drug possession charge at the 2010 John Deere Classic after agents were called to a casino hotel because of a strong odor of marijuana coming from the room he was in.

Every paid the price with a three-month suspension that kept him from retaining his PGA Tour card. He once said earning his card back was his greatest achievement, though that sure takes a seat back to his win at Bay Hill.

Along with getting into the Masters, Every qualifies for two World Golf Championships and the PGA Championship.

Jason Kokrak closed with a 73 to finish alone in fourth. Erik Compton, twice a recipient of a heart transplant, shot 69 and tied for fifth with Stenson and Francesco Molinari of Italy (73).

As big of a win as it was for Every, it was crushing for Scott. His long putter staked him a big lead at the halfway point, and it hurt over the final two rounds, particularly on Sunday. The longest putt he made all day was from 12 feet for par on the 15th hole, and he missed five putts inside 10 feet.

He had talked Saturday night about being in the prime of his career and needing to capitalize on chances. Instead, the 33-year-old Australian let another one get away.

Scott had a three-shot lead over Bradley to start the final round and had another sloppy start.

This time, however, he didn’t recover.

He went bunker-to-bunker for bogey on the opening hole and pulled his 3-wood off the tee and into the water for another bogey on No. 3. He appeared to steady himself with an up-and-down birdie on the par-5 fourth.

He didn’t make another birdie the rest of the way.

Every seized control after one of his worst shots of the day, and one of his best breaks. He pulled his tee shot on No. 9 toward the trees and the out-of-bounds stakes, only for the ball to roll along the cart path for a slight opening through the trees. He hit that 15 feet below the hole for birdie, and then tied Scott for the lead with a 20-foot birdie putt on the next hole.

And when Every made an 8-foot birdie putt on the par-5 12th, it was the first time since mid-morning Thursday that someone other than Scott was not atop the leaderboard. And it only got better for Every – and worse for Scott – the rest of the way.