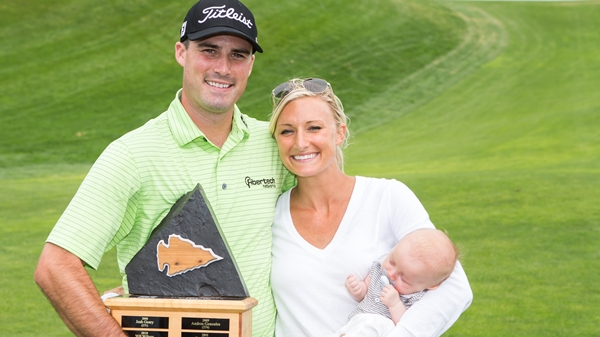 The 29-year old began the day with a five stroke lead and hardly gave his pursuers a chance, carding seven birdies on the day and never letting anyone get closer than within two shots, winning by three over Will Kropp of Edmond, Oklahoma. Harmon moves to 2nd on the Order of Merit through four events, in position to earn one of three RBC Canadian Open exemptions available after the Staal Foundation Open presented by Tbaytel in two weeks.

“I knew I was playing well and that good results were coming. You never know when you’re going to win, so this feels incredible,” said Harmon.

The win comes at a special time for Harmon and his wife Pagiel, who had their 10-week old son Eli on hand for the first time in his career, making the win even more memorable for the young Harmon family.

“You can’t really describe it. She flew up here with him all on her own. I’m just so thankful that we can be together and be able to travel and share this moment,” said an emotional Harmon after the round. “To have them here is just incredible.”

24-year old Kropp, a rookie on PGA Tour Canada, made the strongest charge of the day, carding a 10-under 62 and getting within two shots of Harmon late in the back nine. Harmon, a former Michigan State Spartan, responded with three birdies in four holes in the middle of his back nine to keep his chasers at bay and secure the title.

“I played well today and made a few putts, but if you start seven back and he shots 6-under that’s pretty tough to catch. Kudos to him,” said Kropp, who captured a win on the NEC Series – PGA TOUR Latinoamérica earlier this year at the Abierto OSDE del Centro.

Harmon, who played full time on the Web.com Tour in 2012 and 2013 and finished runner up at the 2012 TPC Stonebrae Championship, said he’s looking ahead to the rest of the season with an eye on maintaining his spot on the Order of Merit.

“Fortunately I’ve gotten off to a nice start. I’m looking forward hopefully to that RBC Canadian Open exemption if you’re in the top three through Thunder Bay, so the next two weeks I’ve got my eyes set on that,” said Harmon.

One shot behind Kropp was Kalmar, Sweden’s Robert Karlsson, who joined Kropp in the charge to catch Harmon before a bogey at the par-5 16th derailed his chances. Karlsson’s finish was his third top-10 of the season and moved him to fifth on the Order of Merit.