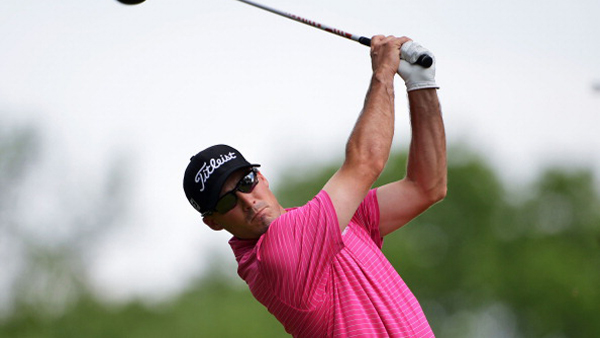 Saskatoon, SK – With his young family on hand for the first time in his career, Grand Haven, Michigan’s Matt Harmon cruised to a 9-under par 63 on Saturday at Dakota Dunes Golf Links, opening up a five stroke lead heading into the final round of the Dakota Dunes Open presented by SaskTel.

The 29-year old and his wife Pagiel have their new son Eli, who turns 10 weeks old on Sunday, at a tournament for the first time this week in Saskatoon, and so far the trip has been a successful one. Harmon’s 63 put him five strokes ahead of Sweden’s Robert Karlsson heading into the final round, six ahead of Moscow, Idaho’s Chris Williams.

“It’s our first family trip, so this is very relaxing,” said Harmon, who ranks 10th on the Order of Merit with two top-10s in three starts. “My guesses were right with the bounces and things went right for me, and I made more putts than I did any of the other days.”

Harmon carded seven birdies on the day, including on two of his final three holes, to go with an eagle to reach 18-under par through 54 holes. The former Michigan State Spartan played the Web.com Tour in 2012 and 2013 and is looking to make his way back starting with a win at Dakota Dunes tomorrow.

“I was telling my caddie today, I think I have a few more life experiences than some other guys in the field,” said Harmon, whose best finish on the Web.com Tour was second at the 2012 TPC Stonebrae Championship. “It’s just golf out here. When you get it going, you just kind of relax and let it go.”

Harmon said that having his family here has made things easier than the first three events, when he played well but had his mind back home with his new family.

“It was tough the play those first three events having to leave my wife to do everything, but she’s awesome, so it’s been great,” Harmon said. “I’m going to come out tomorrow and hopefully keep doing what I did today.”

Karlsson shot a 7-under 65 to hold second place alone, while Chris Williams, formerly the world’s highest-ranked amateur and a Ben Hogan Award winner at the University of Washington, shot 64 to grab third place heading into the final round.