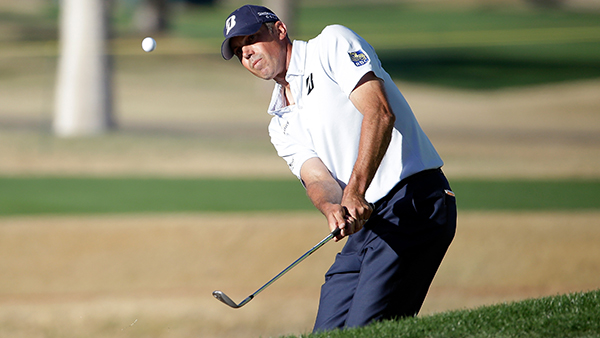 LA QUINTA, Calif. — Matt Kuchar’s ball crashed into the rocks at the foot of the Santa Rosa Mountains and shot sideways into the All-American Canal.

More rocks and water gobbled up another ball — and with it, his third-round lead on Saturday in the Humana Challenge.

“It’s too bad, but it’s what happened,” Kuchar said. “I still got one more day left to try to make some birdies and still pull this thing out.”

Two strokes ahead after a birdie on the par-5 14th, Kuchar bogeyed three of the final four holes for a 1-under 71 on PGA West’s Arnold Palmer Private Course. That left him a shot behind two-time heart transplant recipient Erik Compton, Bill Haas, Justin Thomas and Michael Putnam.

The highest-ranked player in the field at No. 11, Kuchar lost a shot on the par-3 15th when he drove to the right, sent his second to the back edge and missed a 14-footer.

“Just nearly an impossible up-and-down if you miss the green right,” Kuchar said.

He bogeyed the par-3 17th after his tee shot went right, bounced off the mountain rocks and raced across the green into the canal.

“With a pitching wedge, you’re looking to hit a good shot,” Kuchar said. “Unfortunately, I let it hang too much and it caught a rock and went in the water.”

The seven-time tour winner closed with another rocky bogey, ending his birdie-eagle string on the par 5s. On the first 12 pars 5 of the week, he had an eagle and 11 birdies.

On 18, his 235-yard approach sailed long and left into the rocks and water. After his ball rolled away on a penalty drop, he placed it deep in the dormant grass, blasted out to 8 feet and two-putted.

“I hit a great drive and was in between a 3- and 4-hybrid,” Kuchar said. “I went with a 3-hybrid, trying to get it back to the hole and hit a solid shot that just didn’t fade.”

Compton shot a 67 on the Jack Nicklaus Private Course to join Haas, Thomas and Putnam at 17-under 199. Haas, the 2010 winner, had a 69 on the Nicklaus layout. Thomas shot 68 on the Palmer course, and Putnam had a 69 at La Quinta Country Club.

“I had a couple shots that were loose on the drives, but I salvaged the round,” Compton said. “Tomorrow’s a new day.”

On the final day of the pro-am competition, Compton played in a group with amputee Chad Pfeifer and Baltimore Orioles pitcher Bud Norris. Pfeifer lost his left leg in Iraq.

“On the third hole, he said, ‘Hey, listen, you know, you really inspired me learning about your story,'” Compton said. “And I’m kind of speechless, because I see him with a huge adversity that he’s gone through and it speaks volumes.”

Haas is making his first start since November. He took the long break to rest his left wrist, injured when he fell down stairs at Hilton Head.

“So far, something to build on, but I also know in the back of my head I don’t think I’m a hundred percent,” Haas said. “So, I’ll go on the range and work on it. I just got to stay in the moment and try not to hit too many foul balls tomorrow.”

“I’m pleased where I’m at going into tomorrow,” Thomas said.

Ryan Palmer, Scott Pinckney and Steve Wheatcroft were a stroke back along with Kuchar.

Defending champion Patrick Reed, paired with Kuchar, was tied for ninth at 14 under after a 67. He’s coming off a playoff victory two weeks ago in Hawaii in the Tournament of Champions.

Phil Mickelson was 11 under in his first start since the Ryder Cup in September. He had eight birdies and four bogeys in a 68 on the Palmer course.

“It was a day that could have been really low,” Mickelson said. “It had a lot of potential and I ended up making too many bogeys and letting some birdie opportunities slide.”

Both Graham DeLaet of Weyburn, Sask. and Adam Hadwin of Abbotsford, B.C. posted a third-round 66. DeLaet is tied for 24th at -12, while Hadwin sits tied for 63rd at -8.