Matthew Yustin is “The Real Thing” 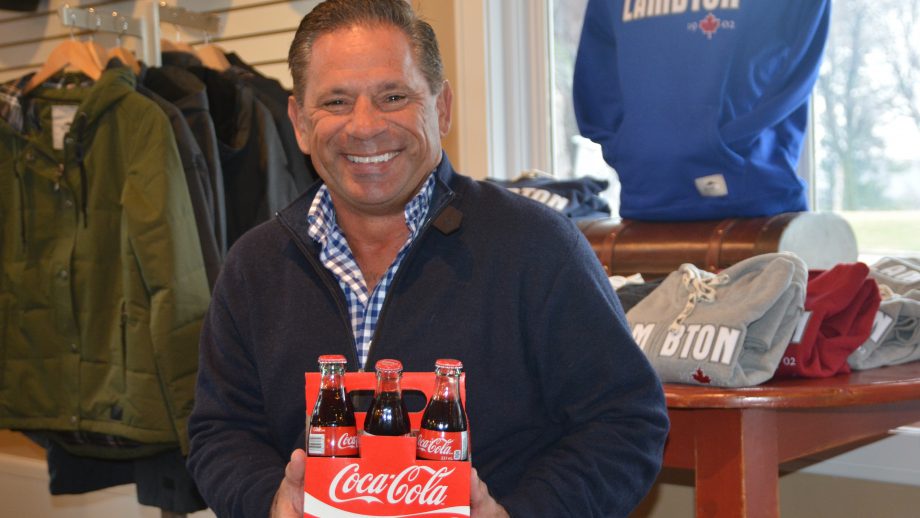 As the sweating glass bottle of cool Coco-Cola that Matthew Yustin had hidden behind his principal’s seat in the school cafeteria started to wobble, the Canadian had no idea how much trouble he was going to get into. Nor did he know that “The Real Thing” would change his life forever.

The 14-year-old, Grade 8 student from Toronto had been attending Singapore American School for a couple of years, while his dad was working in Hong Kong. On this day, the clever practical joker nonchalantly crept behind the wooden picnic bench where Principal Fogie was sitting with the rest of the faculty and placed the bottle precariously on the edge. With 200 children eating lunch and a slab of hard concrete as the floor, the stage was set. As Principal Fogie stood up to leave, the bottle came toppling down, exploding with a crashing spray that dampened many a teacher and students.

“It really was quite funny. All the kids burst out laughing and clapped their hands and I ran up the hill and laughed my ass of,” says Yustin, who was recently named the PGA of Ontario Golf Professional of the Year for 2015. Needless to say, Principal Fogie was seriously pissed, and Matthew was suspended, for the first and only time in his life.

To this point in his life, Yustin hadn’t played any golf, didn’t really understand the game, preferring motocross. As a form of punishment, his mother forced Matthew to attend the Singapore Open to keep the teen out of her hair for a few days.

“It was March 16th when I went to the Friday round. I fell in love with the game at that very instant, then followed him for two more days on the weekend,” says Yustin who is now 58 and has three of his own children, Alexandra, 24, Matthew Jr., 18 and Gracie, 16 with his wife Andrea.

“I followed Dean May, a cool California dude with long, blond haired and had a blast each and every day. I had our chauffeur take me to get my hair cut just like Dean’s, bought some polyester pants to match his look and started taking lessons on the Monday from Norman Von Nida, a very famous Australian PGA touring pro and coach who taught David Graham to play. It was love at first sight, the real thing for me and it hasn’t diminished one bit.”

Five years later, the Yustin’s returned to Canada and Matthew, who was a scratch golfer at that time, started playing golf at St. George’s Golf & Country Club where his father was a member. He spent four years taking Soviet Studies at the University of Toronto, but in reality he had golf on his brain 24/7 and he would sit in class doodling and drawing golf holes  . . .  It’s still on his mind as much today and one of the reasons, even after 30 years in the business, that he’s at the top of his game as one of the top golf professionals in the country.

It was almost lights out for Yustin in 1985 as the 26-year-old drove home from an assistant’s golf tournament at The National Golf Club of Canada.

“I woke up in the driver’s seat screaming in pain, I was trapped and the priest was giving me my last rights,” says Yustin who suffered a broken leg, broken femur, broken pelvis, broken hip, broken knee, broken nose, a half-dozen broke ribs and loss of bunch of teeth as a result of the carelessness of a drunken driver. “I listen to the news today, 30 years later and so little has changed, it’s disgusting.” After two years of rehab, he learned to walk again, but he lives with the pain and memories every day.

“Gar Hamilton has been my role model and mentor in this business. In my eyes he is the epitome of what it takes to be a club professional. After I worked for him at Mississaugua I knew exactly what I wanted to do with my life, be a head professional at a private club with ivy on the clubhouse in the GTA,” says Yustin, who also gives kudos to the likes of Neil Verwey from St. George’s Golf & Country Club, Phil Hardy from Beacon Hall for steering him in the right direction and PGA of Canada Master Professional Bruce McCarrol.

In the fall of 1992, Yustin was playing golf with Toronto Blue Jays right-hander Dave Stieb at Mississaugua when he received a call from a friend at Lambton with connections at Mandarin. They were interviewing that night for a new head professional and Yustin had one moment to decide if he wanted to drop everything and head downtown for an interview or finish the game. Yustin left Stieb on the 16th, printed out his resume in the golf shop and headed to Toronto.

“I walked into the job interview and started speaking Chinese, that I had learned while being in Singapore, and the job was mine,” says Yustin who cracked open “The Real Thing” to celebrate.

At Lambton, Yustin and his team, which includes PGA of Canada professionals Chris Vasey, Darryl Pan and Steve Manock, who transferred from The Mandarin when Yustin came on board, have continued to provide a level of service that the club had not previously experienced. His wife, Andrea does all the merchandising and all their children worked in the shop at one time or another.

“When I was hired I made a promise to provide members with a gold level standard of service similar to what guests of the Ritz Carlton Hotel experience and we try to improve on that daily,” says Yustin who has filled the golf shop with antiques to give it a personal touch. “We provide a level of service that goes beyond the expectations of our members and their guests, that is all I ask of my staff,” he says, noting that can mean long days at the club, but as another Coca-Cola slogan says goes, “You can’t beat the feeling.”