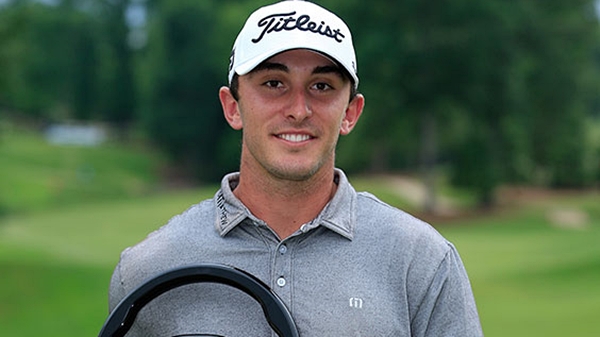 GREER, S.C. – Max Homa won the BMW Charity Pro-Am on Sunday for his first Web.Com Tour title, closing with an 8-under 63 at Thornblade Club for a one-stroke victory over Jonathan Randolph.

“It’s surreal. It’s emotional,” Homa said. “I didn’t win a lot in college and to come out and do it quickly means a lot to me and gives me a lot of confidence for wherever I may wind up at the end of the year.”

Homa turned professional last year after the helping the United States win the Walker Cup. He eagled the par-5 second hole and had six birdies in his bogey-free round.

“This course fit my eye better than the others for some reason,” Homa said. “It was a huge start. It really set the tone because I didn’t have to play catch-up too much. It really calmed my nerves. I knew I had to keep my emotions in check.”

Randolph also finished with a 63.

Blayne Barber, coming off a victory two weeks ago in the South Georgia Classic, tied for third with Jon Curran and Kyle Reifers. Barber had a 67, and Curran and Reifers shot 66.

Homa and celebrity partner Janet Jones-Gretzky tied for ninth in the pro-am portion of the event at 35 under. Canadian pro Adam Hadwin and hockey great Wayne Gretzky won at 44 under. Individually, Hadwin finished at 10-under and tied for 36th. The only Canadian in the field to top Hadwin was Roger Sloan. Sloan finished tied for 18th at 13-under.

“She was so nice and it was cool playing with her,” Homa said about Jones-Gretzky. “It was fun to compete with her. It was great playing with someone so famous because I got to fly under the radar while she was getting all of the attention from the television cameras and fans.”