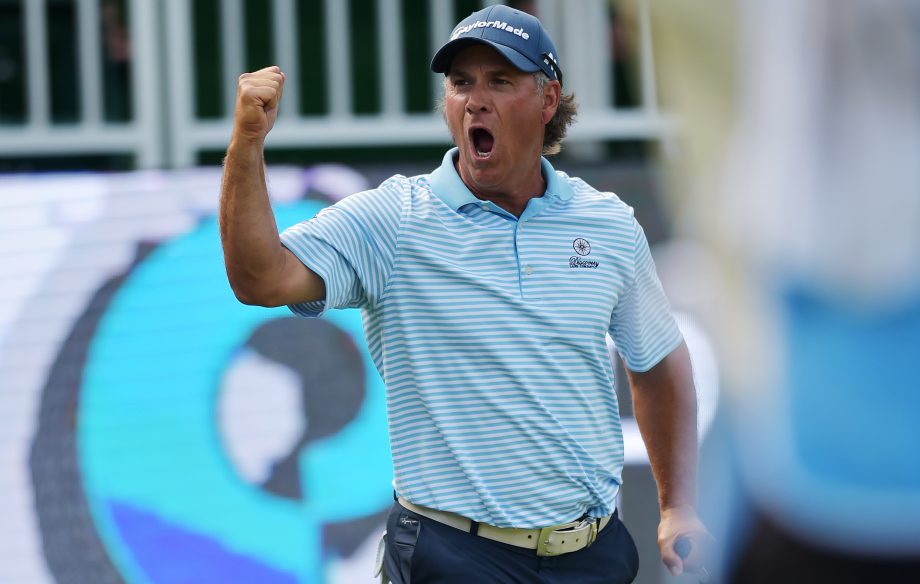 DES MOINES, Iowa – Marriage has made Scott McCarron a much better golfer.

McCarron won the Principal Charity Classic on Sunday for his first PGA Tour Champions title, birdieing the final three holes for a 7-under 65 and a one-stroke victory.

The 50-year-old McCarron finished at 15-under 201 at Wakonda Club to edge Miguel Angel Jimenez and Billy Andrade. Making his 17th start on the 50-and-over tour, McCarron won for the first time since taking the 2001 Bellsouth Classic for the last of his three PGA Tour titles.

McCarron didn’t have a top-10 finish during the first three months of the season. But after getting hitched last month, he had back-to-back top-10s before his milestone victory in Iowa.

“She’s been a phenomenal support. Even when I was thinking of hanging it up and just doing TV, she really pushed me,” McCarron said about wife Jenny. “I’ve got to hand it to her. She really stuck by me through a lot of difficult times.”

Andrade had a 68 after shooting a course-record 63 on Saturday. Jimenez shot a 67.

McCarron’s surge began with an eagle on the 5th hole that put him in position to challenge the leaders, and he pulled even with a birdie on the par-4 16th.

McCarron then drilled a 36-foot birdie putt from the fringe on No. 17, and he put his approach from the rough on the 18th hole within 10 feet of the pin.

McCarron played his final 47 holes without a bogey.

“Once I got to 16 I said, ‘You know, if I can birdie the last three I might have a chance to close it out.’ I played some great holes the last couple of holes,” McCarron said.

Jimenez appeared to be primed for his fourth senior tour win in just 12 starts after a long birdie putt on the 10th hole. But Jimenez bogeyed the 12th hole and could only muster pars on the 16th and 17th as McCarron surged past him.

Still, Jimenez has finished fourth or better in his last three appearances on the senior tour this season.

Andrade, Durant and Todd Hamilton began the final round in a three-way tie for the lead.

Only Andrade was truly a factor Sunday.

Andrade fell quickly from the top, with bogeys on his first three holes. But he surged back and had a relatively easy eagle putt on the 15th hole, which he left it just inches wide.

Andrade could’ve forced a playoff with a long-shot chip on No. 18. He didn’t get it, but Andrade did sink a long putt to tie for second.

“Just a bad start. It was a funky day. The wind was swirling,” Andrade said.

Durant also started poorly before a string of birdies on the back nine ensured a top-five finish.

Hamilton also fell apart on the front nine. Hamilton had four bogeys and, like Durant, a double bogey on No. 7. He shot a 76 to tie for 17th.

John Daly, whose debut in Iowa helped draw record crowds all weekend, finally put together a solid round. Daly shot a 69 and wound up 1 over for the tournament, just a week after missing the cut at the Senior PGA Championship.