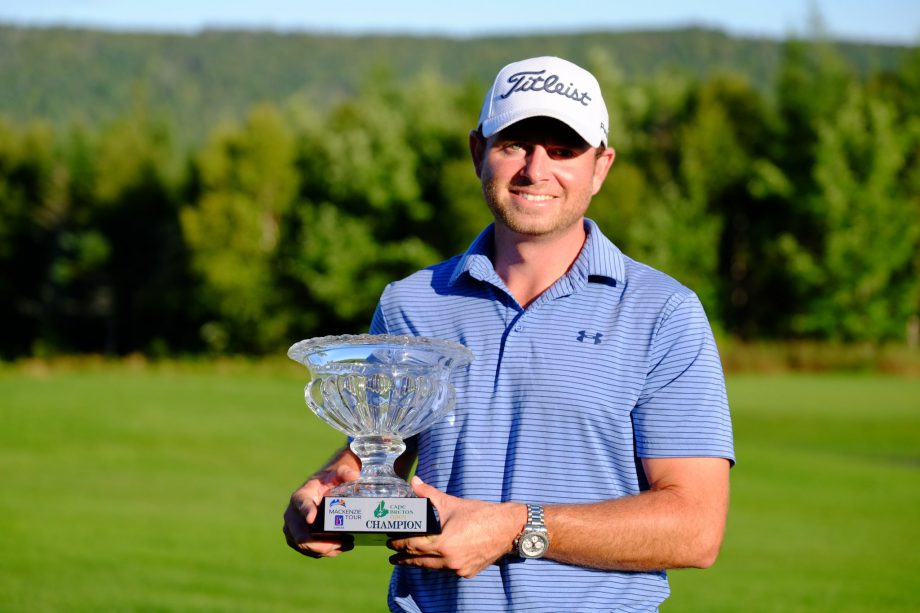 The 31-year old rode a streak of three straight birdies on the back nine to finish 18-under and secure a three-shot win over Denver’s Michael Schoolcraft, winning for the fourth time this year and strengthening his hold atop the season-long Order of Merit.

“This one was tough,” said McCarthy. “I played well all day long, and early on I had a lot of opportunities that I didn’t convert. It really didn’t happen until I made a good par save from about six feet on 14, and I just needed to see one go in. It was tight all day long. This was not easy today by any stretch.”

After carding birdies on the first two holes, it looked as though McCarthy would once again run away from the field. The LeMoyne College graduate started the day tied for the lead with Schoolcraft and Burlington, Ontario’s Michael Gligic, and had already converted three 54-hole leads or co-leads into victory this season.

But after a mid-round stall and a charge by Gligic, who took the lead with birdies on the ninth and 10th holes, McCarthy found himself chasing from behind. He found his spark, however, by draining a six-foot par putt on the 14th hole that but the momentum squarely behind him.

“That was a big relief. I had been missing putts all day long, and when you’re missing, you’re a little unsure of your reads. I finally rolled that one right in the middle, and that gave me the confidence going forward,” said McCarthy.

Suddenly, the Order of Merit leader was in control, and with birdies on 15, 16 and 17, the lead ballooned to four shots, clearing the way for a walk up the 18th hole with victory all be secured.

With the win, McCarthy expands his commanding lead atop the Order of Merit to $60,988 over No. 2 Taylor Moore, guaranteeing himself a spot in The Five and Web.com Tour status for next season. The only way McCarthy cannot finish atop the Order of Merit now would be for Moore to win out and McCarthy to earn less than $6,512 in the remaining two events of the season.

“I’ve struggled getting through Q-School and all that, but I’ve played a lot of really good golf over the last couple of years, and I just didn’t do it at the right time. It feels amazing to do it right now at the right time and hopefully seal the deal,” said McCarthy of achieving his goal of reaching the Web.com Tour.

For McCarthy, who has preached a patient approach based on playing his own game for the whole year, the unprecedented season of winning comes thanks to experiences in the past that didn’t turn out as glorious as they have this year.

“I’m a little older than some of the other guys in that top five. I’ve unfortunately screwed up a number of times, and I think we learn the most from our mistakes. I’ve made a lot of mistakes in my career, and tried to learn as much as I could from those,” said McCarthy.

Schoolcraft’s birdie on the 18th hole earned him his best career Mackenzie Tour finish and moved him to eighth on the Order of Merit, while Gligic, Moore and Dillon Rust finish in a three-way tie for third at 14-under.

With a total score of 14-under par in a tie for third place, Burlington, Ontario’s Michael Gligic finished as the top Canadian on the leaderboard, earning Freedom 55 Financial Canadian Player of the Week honours and a $2,500 prize. Gligic also captured the honour earlier this year at the Players Cup.