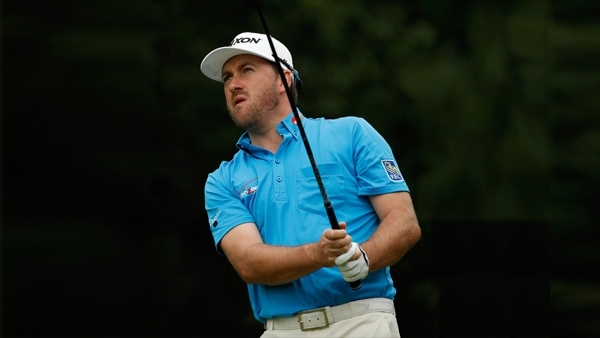 SHANGHAI, China — The HSBC Champions has a familiar look to Graeme McDowell, with a few exceptions.

He goes into the weekend at Sheshan International in contention for a World Golf Championship, with Ian Poulter and a big-hitting American alongside. Only, now, the American is Masters champion Bubba Watson – not Dustin Johnson, who overpowered the course on his way to victory last year.

And at least this time, McDowell has the lead.

McDowell leaned on a hot putter to carry him to another 5-under 67 on Friday. That gave him a three-shot lead over Poulter, with Watson and Hiroshi Iwata of Japan right behind.

Tournament organizers might be missing the presence of Johnson, the defending champion who is on a “voluntary leave” for what he described as personal challenges. Just don’t count McDowell among them, especially not the way Johnson set the tournament record at 24-under 264.

“He looked unbeatable last year the way he played this golf course,” McDowell said. “But we’ve got a fairly decent replacement in Bubba, who in his own way has got the same kind of talents as Dustin, the way he drives it and the short game. In many ways, it’s a very similar scenario _ myself and Poults against the long-hitting American.”

McDowell saved par when he had to and strung together back-to-back birdies early and late in his round to reach 10-under 134.

Poulter and Watson showed that a deficit can be made up quickly, particularly on the dynamic finishing holes at Sheshan International.

“Hit some good shots but couldn’t make some putts. Hit some bad shots and made some putts,” Watson said. “It was a great last five holes.”

Poulter was five shots out of the lead when he birdied four of the last five holes – he made par on the par-3 17th – for a 67 that put him three shots back.

“Probably the best I’ve played all year, which is very exciting,” Poulter said. “It was a little frustrating the first 13 holes that I was missing chances, but four birdies in the last five holes … chances started to go in at the end and I’m very happy.”

McDowell is not one to complain about a pair of 67s on any golf course, though they were different. He only missed one fairway in the opening round, which set up plenty of birdie chances. He had to scramble more on Friday, though at least he could rely on his putter.

“I have to improve tee-to-green to have a chance on Sunday,” McDowell said. “I’m putting great _ I love these greens. I’ve just got to keep doing it. I have to go out there tomorrow and not think about making mistakes. Just have to keep the pedal down, execute my game plan, and give myself a chance to win on the back nine on Sunday.”

Adam Scott might have cost himself a chance with a wild round.

The Australian opened with four birdies through seven holes to get within two shots of McDowell. A poor tee shot changed everything. He pulled his drive into a water hazard on the 603-yard eighth hole and had to drop at one of the forward tees. Trying to reach the green in two, he came up just short of the creek in front of the green, and then his pitch from gnarly rough didn’t quite reach the green and rolled into the hazard next to a large rock.

Scott decided to take a penalty drop from the other side of the creek and made a quadruple-bogey 9, wiping out those four birdies. He followed with an approach into the water on the ninth for a double bogey, and made eagle on the back nine to salvage a 72. He still was eight shots behind.

Poulter liked his position much better.