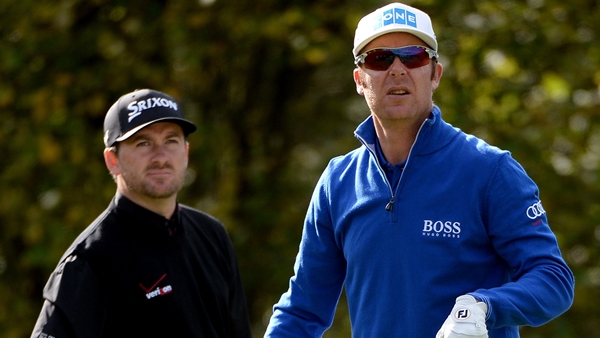 McDowell fell to Mikko Ilonen of Finland 2 and 1 in their second pool match at the London Club.

It was only McDowell’s third defeat in 18 matches in the event.

Ilonen raced to 4 up after 10 holes before McDowell fought back with birdies on 11, 13 and 15 to be 1 down. But Ilonen, the Irish Open champion, birdied the 17th to seal the win.

“It feels very good to beat a player of Graeme’s quality,” Ilonen said.

Only their pool leader Joost Luiten of the Netherlands, and Victor Dubuisson, remain unbeaten going into the last round of pool play on Friday, to determine the quarterfinalists.

Stenson, the top seed in the 16-man event, produced a startling finish of eagle-birdie-birdie to overcome Francesco Molinari of Italy 2 and 1. Molinari carded 7 under but Stenson went 8 under over the last nine holes, not leading the match until his second-to-last birdie on 16.

There was a measure of revenge for Stenson, after Molinari knocked him out of the event a year ago in Bulgaria.

“I gave Francesco a couple of early gifts being 3 down after four. That really was not in the plan but I didn’t give up,” Stenson said.

“To be eight under from nine onwards meant for another good day. Considering I came here not having touched a golf club for nearly two weeks, I will take that.”

Pablo Larrazabal holed a chip shot from the rough for birdie at the last hole to defeat Stephen Gallacher 1 up.

Larrazabal birdied the opening two holes to race ahead, but Gallacher then birdied the third, fifth and sixth holes to take the lead.

The duo halved the next five holes before Larrazabal won the 13th and claimed victory at the last.

Dubuisson was never behind Shane Lowry of Ireland, claiming a 3 and 2 victory at the 16th hole.

Luiten was 4 up through 11 holes en route to beating Alexander Levy of France, last week’s Portugal Masters winner, 4 and 3.

Ryder Cup-winning hero Jamie Donaldson won 4 and 3 against Jonas Blixt of Sweden, American Patrick Reed won his first match in the event, 2 and 1 over 2006 champion Paul Casey of England, and George Coetzee of South Africa remained in quarterfinal contention by beating 2013 runner-up Thongchai Jaidee 2 and 1.