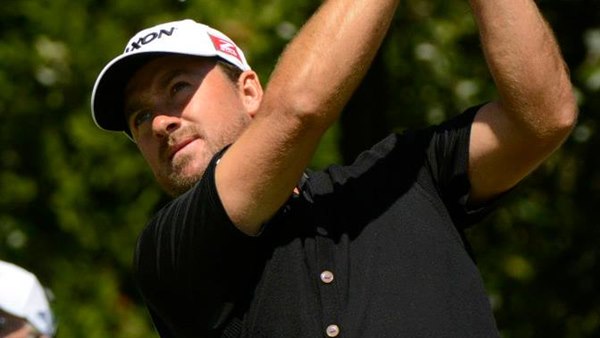 MARANA, Ariz. – Getting to the round of 16 in the Match Play Championship was all that mattered Thursday.

Jordan Spieth made it look like child’s play. Graeme McDowell aged another 10 years with another stunning escape. And it proved too difficult for Henrik Stenson, Justin Rose and Rory McIlroy, who lost in extra holes on another wild day at Dove Mountain.

“I thought I was dead and buried both days,” McDowell said.

One day after he rallied from 3 down with three holes to play to win in overtime, McDowell was two holes behind on the 15th tee when he made an 8-foot birdie, halved the next hole with a 10-foot par, won the 17th with a birdie and then holed a 6-foot par putt on the 18th for a 1-up win over Hideki Matsuyama of Japan.

In two matches, McDowell has stood on the tee with his match all square only four times – and two of those were at the start of the match.

Jason Day already has played 40 holes in two rounds. He won a tough match against Thorbjorn Olesen in the opening round, then rallied from 3 down early in his match against Billy Horschel and beat him 22 holes.

The top seeds lost their way.

Stenson, the No. 1 seed, fell behind early against Louis Oosthuizen and never caught up in a 4-and-3 loss. It was the sixth straight year, dating to Tiger Woods winning the Accenture Match Play Championship in 2008, that the top seed failed to make it out of the second round.

In one of the best matches of the day, Ernie Els poured in one clutch putt after another to stay in the match, and then beat the reigning U.S. Open champion. Els got up-and-down on the 18th hole by making a 6-foot par putt. Els and Rose both made 10-foot birdie putts on the 19th hole, and then Els finally got a break to go his way in a format that has haunted him over the years.

His approach settled on the slope of the bunker’s collar, and while the shot didn’t go as planned, it was close to perfect.

“It was one of those once-in-a-lifetime shots, really,” Els said. “I caught it a smidgen thin, and it just came out perfectly. It hit the bank and just trickled over to about 4 feet. It was an impossible shot, but it was obviously the right one at the time.”

Rose left his shot in the bunker.

McIlroy had his hands full against English, who has two PGA Tour wins in the last nine months. Boy Wonder managed a strong comeback, however, winning three straight holes for a 1-up lead with two to play. English responded with a 20-foot birdie putt to square the match, and off they went to overtime.

McIlroy went from the left rough to the desert on the 19th hole, and his only hope was to play an explosion shot that came off perfectly. It didn’t, sailing over the green by the television tower. He made double bogey and was headed home to Florida, though hardly depressed.

“He played really solid today and didn’t really do much wrong, didn’t really give me anything,” McIlroy said. “I don’t feel in any way disappointed leaving so early because I feel like my game is there. I’m looking forward to the next couple of weeks.”

Sergio Garcia at No. 5 is now the top seed remaining after his 3-and-1 victory over Bill Haas. Next up for Garcia is Rickie Fowler, who is finding this format to his liking. Coming off three straight missed cuts, Fowler outlasted one of golf’s hottest players, Jimmy Walker, in 18 holes.

Kuchar had a 1-up victory over Ryan Moore in a match so close that 15 of the 18 holes were halved. Kuchar, the defending champion and a former U.S. Amateur winner, improved to 17-3 in this tournament. Hunter Mahan didn’t take his first lead until the 17th hole in a 2-up win over Richard Sterne of South Africa.

Kuchar and Mahan are the only players to reach the third round in each of the last four years.

Next up for Kuchar is Spieth, who has been a factor in four of the five tournaments he has played this year. Mahan faces McDowell, which prompted one British writer to jokingly ask McDowell if they had ever played each other.

McDowell beat Mahan in the final match of the Ryder Cup four years ago in Wales, making a 15-foot birdie putt on the 16th hole.