McIlroy 9 behind leader after Dunhill first round 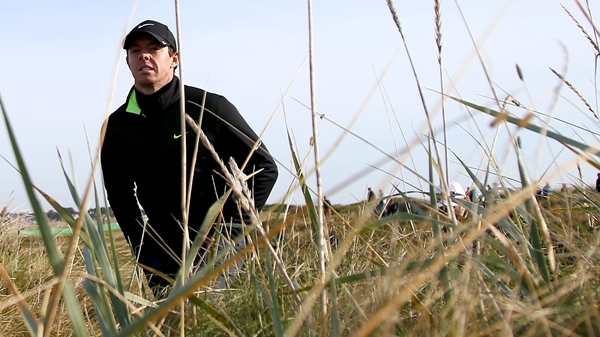 ST. ANDREWS, Scotland – Rory McIlroy found himself nine shots off the lead after a 1-over-par 73 in the first round of the Alfred Dunhill Links Championship on Thursday.

Four days after celebrating a third straight European Ryder Cup victory, McIlroy could manage just one birdie against two bogeys at Carnoustie, one of the three courses.

Oliver Wilson of England, ranked 791 places below the top-ranked McIlroy, equaled the Carnoustie course record with an 8-under 64. It’s the second straight year he’s shot an opening 64 to lead the Dunhill Links. Last year, he finished tied for 59th.

Wilson was in the Ryder Cup in 2008, the last time Europe lost to the U.S, but since 2011 has been competing on the secondary Challenge Tour. He received an invite for this week and sank nine birdie putts, finishing birdie-birdie-birdie-bogey-birdie.

“I shot a 63 a fortnight ago in the Kazakhstan Open, which is our major on the Challenge Tour, so to shoot a 64 here at Carnoustie is very pleasing,” Wilson said.

“I only dropped one shot, which was disappointing at 17, but then to birdie the last makes up for that. I’m so delighted to get Carnoustie and the tougher of the three courses out of the way.”

Raphael Jacquelin of France, also at Carnoustie, was one shot behind in second after a 65 which included an eagle on the par-5 14th, his fifth hole.

The Irish pair of Padraig Harrington and Shane Lowry shared third with 66s. Harrington, at Carnoustie where he captured the 2007 British Open, bogeyed his closing two holes.

The 55th-ranked Lowry, desperate to earn a maiden Masters invitation by being inside the top-50 at year’s end, birdied six of his opening 10 holes at Kingsbarns course.

McIlroy sent his opening tee shot at Carnoustie way left after hitting the ground about four inches (10 centimeters) behind the ball, but then managed to save par on the course where he won the low amateur medal in the 2007 Open won by Harrington.

“I just felt a little flat coming here after the crowds and everything that we were playing in front of last week,” he said.

“I’ve got Kingsbarns tomorrow, so I will try and post a better number and try and hang in there, and then go to St. Andrews over the weekend, a golf course I’ve played well on before.”

Of the three other Ryder Cup winners in the field, Stephen Gallacher fared best with two eagles in a 68, followed by Victor Dubuisson (71), and Martin Kaymer (74). Their captain, Paul McGinley, was 2 over after four holes before ending with a par 72.