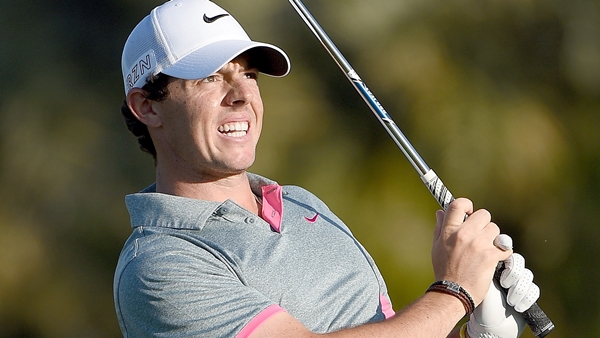 DUBAI, United Arab Emirates – Rory McIlroy extended his lead to four shots with a 6-under 66 in the third round of the Dubai Desert Classic on Saturday.

The top-ranked McIlroy, who led by a stroke overnight, made just one birdie on the back nine of Emirates Golf Club’s Majlis course after five birdies in his first eight holes.

With an overall 20-under 196, McIlroy can challenge the tournament winning record of 22 under, set by Stephen Gallacher in 2013 and Thomas Bjorn in 2001.

Denmark’s Morten Orum Madsen, who shot a 9-under 63 on Friday, was second after a 66 with six birdies.

Defending champion Gallacher survived bogeys in the opening nine before hitting three birdies on the back nine. The Scot is tied for fourth at 203 alongside England’s Andy Sullivan and Danny Willett (70), and Austria’s Bernd Wiesberger, after all four shot 70.

At the 549-yard par-5 hole, the Northern Irishman smashed a drive that went a massive 380 yards. But McIlroy could not birdie the hole as his effort from less than two feet spun out of the hole.

“I didn’t put a foot wrong on the front nine and, when I missed that little short putt on 10, it seemed like that momentum I had just sort of went away and had to scramble a little bit for pars coming in,” McIlroy said.

He finally got a birdie again on the 17th, where he made an 18-footer, but needed to scramble to save par on the final hole after hitting his 4-iron second from 205 yards into the water guarding the front of the green.

“It was nice to make one birdie on 17 and then a great save on the last. It was nice to go out there today with no bogeys,” McIlroy said. “I was just trying to get as many in front as I can.”

As McIlroy surged, his closest rivals fell away on moving day and the 194th-ranked Madsen has the unenviable task of attempting to reel in the four-time major champion on Sunday.

“I was nice and calm all the way and putted well and hit the ball solid,” Madsen said. “I wasn’t really in any major trouble, so that was nice.”

The $2.5 million tournament forms the closing leg of the three-stop Desert Swing of the European Tour.