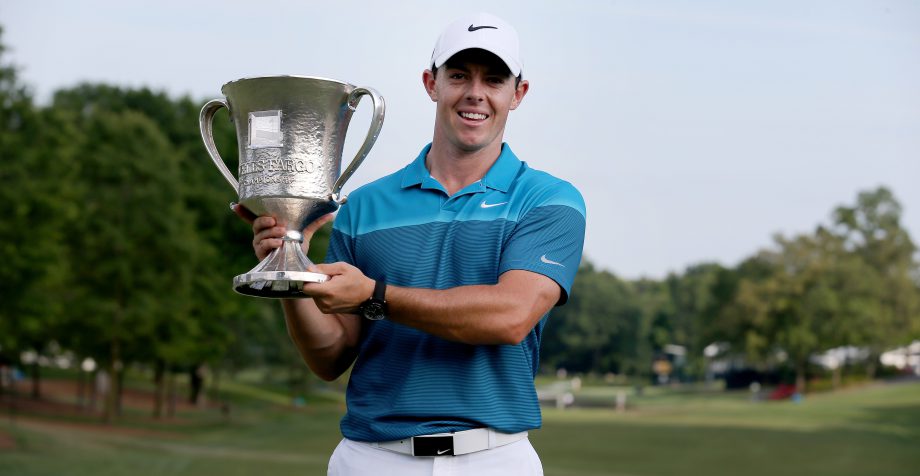 It was still effective.

Always in control, the top-ranked McIlroy became the first two-time winner in the Wells Fargo Championship with a seven-shot victory over Webb Simpson and Patrick Rodgers.

McIlory closed with a 3-under 69 to finish at 21-under 267, shattering the tournament record by five strokes. He entered the day with a four-stroke lead over Simpson after a course-record 61 on Saturday.

“Everything is firing on all cylinders for me,” McIlroy said.

McIlroy won at Quail Hollow in in 2010 for his first PGA Tour title, shooting 15 under. Anthony Kim set the previous tournament record of 16 under in 2008.

“The golf course just sets up really well for me,” McIlroy said.

McIlroy had another word to describe his play on the back nine.

“Boring,” he said with a laugh.

Unlike his win in 2010, McIlroy didn’t finish in a flurry by carding 3s on the last six holes. On Sunday he played the last half-dozen holes in 1-under.

Then again, he didn’t really need to shoot lights out with nobody chasing him.

Rodgers, playing on a sponsor exemption, was the only player to mount any type of a challenge, getting within three shots after a birdie at No. 15. But there was too much ground to make up, and he played the final two holes in 3-over and finished with a 68. Simpson shot a 72.

McIlroy almost didn’t play at Quail Hollow this week, but decided he needed to play more because he needed the FedEx Cup points after the Masters.

The win moved him into third place in the standings.

McIlroy got off to a shaky start with a three-putt bogey on No. 2 – his first in 167 holes – but quickly pulled it together. He didn’t have another bogey until the 17th hole, when he had built a seven-stroke lead and outcome was already decided.

Simpson failed to capitalize on McIlroy’s early mistake, shooting 37 on the front nine that included a double bogey on the par-3 sixth when he three-putted from 8 feet. That dropped the Charlotte resident six shots back and he was never in contention again.

“He’s our best player right now and I wish more than anything I could have shot a couple under on the front to make it more exciting,” Simpson said. “Just didn’t have it today.”

McIlroy reached 20 under on No. 12 when he knocked his approach shot from 132 yards to 2 feet of the cup for a tap-in birdie and it looked as if he might coast the rest of the way.

But Rodgers, who earned his first top-25 finish on the PGA Tour, made it interesting when he played a seven-hole stretch in 6-under par, sparked by an eagle on the par-5 10th hole. But McIlroy didn’t flinch when Rodgers drained a 15-foot putt on No. 15 to pull within three shots of the lead.

Instead, McIlroy countered by rolling in a birdie putt on his own on No. 14, moving to 21 under and regaining a four-shot cushion.

McIlroy then put an exclamation point on the win by drilling his approach shot from 145 yards to 3 feet on No. 16 for his tournament-record 27th birdie.

“I had a goal to go out there and birdie the par 5s and the two drivable par 4s and I knew if I made six birdies there was pretty much no chance that anybody could catch me,” McIlroy said. “With my length and the way I’m driving it, it’s a big advantage around here and it showed this week.”

It also helped having a big lead.

“You can pick and choose where you want to be aggressive,” McIlroy said.

Rodgers ran out of gas on No. 17 when he dunked his tee shot in the water and took a double bogey to fall seven shots back. Still, it was a solid finish for Rodgers, who earned an automatic berth in The Colonial next week by virtue of his top-10 finish.

“It has given me a lot of confidence moving forward,” Rodgers said.

Mickelson finished in a three-way tie for fourth place at 12 under with Gary Woodland and Robert Streb.