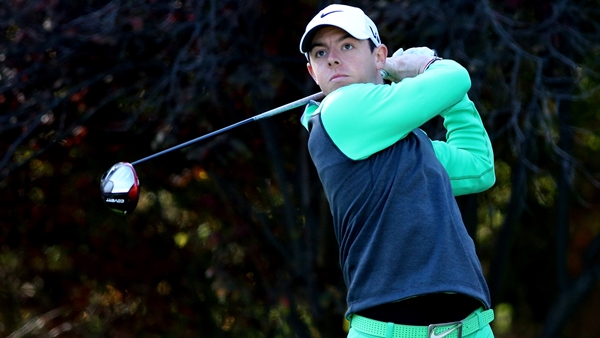 THOUSAND OAKS, Calif.  -Rory’s McIlroy’s year began with a coronation. He was the star attraction at what felt like a rock concert, with music blaring and lasers flashing in a room at Abu Dhabi to celebrate the No. 1 player in golf joining Nike’s stable.

It ended Sunday with a bogey on the ninth hole at Sherwood with hardly anyone watching.

An off-season never looked more appealing to him.

“It’s been a long season, a long stretch,” McIlroy said after signing for a 70 to finish 11th in an 18-man field at the World Challenge. “I’m excited to put the clubs down for a little bit, have a few weeks’ rest and get after it at the start of the new year.”

He won’t have to worry about getting used to new equipment. He spent the better part of nine months doing that.

Expectations are sure to be lower.

A year ago, McIlroy was the clear No. 1 in golf. He was coming off another record win in a major – an eight-shot victory in the PGA Championship – and threw his game into overdrive with two FedEx Cup playoff wins and money titles on both sides of the Atlantic by closing his season with a win in Dubai.

It looked as if he would stay there for many years.

There were equipment issues, a product of changing everything at once instead of slowly working the swoosh into his bag, as Tiger Woods did a decade earlier. He changed management companies, which ordinarily is a seamless transition unless the split is ugly.

McIlroy is scheduled to be in a courtroom in Ireland not long after the Ryder Cup next year. So yes, this is ugly. According to reports in Irish newspapers, he split with girlfriend Caroline Wozniacki at least twice, maybe three times. Except it wasn’t true. The tennis star was at Sherwood all week, an ever-present smile as she followed him along, even going across the parking lot to hit balls (tennis, not golf) at Sherwood’s stadium court.

All that became as tough an obstacle as anything on the golf course.

McIlroy, for all his brilliance inside the ropes, is refreshingly honest when it comes to his golf and often self-deprecating. He was talking earlier in the week about playing casual rounds with friends, noting that he had more of those days than in previous years.

It wasn’t that bad, though his golf certainly was by his standards. He failed to make the cut five times, which is high for a player of his calibre. One was at the British Open. Another was at the Honda Classic, where he walked off the course after 26 holes out of frustration, blaming it on his wisdom tooth.

He didn’t win a tournament until his 24th start, two weeks ago at the Australian Open. He ends the year at No. 6 in the world, miles away from Woods at the top.

“It’s been the first year I’ve had to put up with scrutiny and criticism,” McIlroy said. “You just have to believe in what you’re doing and not let it get to you too much. I let it get to me a few times.”

The toothache was one example of that. McIlroy conceded a week later at Doral that all the hype translated into more pressure he put on himself to perform, and he snapped. An honest answer. He said he would never do it again. So far, so good.

More than the golf was the inspection outside the ropes.

“All the other stuff,” he said. “I don’t care what people say about my golf. It’s when people start digging into my personal life, that’s where it starts to annoy you. Whether it’s Caroline, the management, all that should that should be no consequence to how I play my golf.”

That’s a part of celebrity he still hasn’t mastered.

When you’re 24 and already have two majors (setting records in each), when you’re dating a former No. 1 tennis player, when you’re looked upon as the next great player in golf, there will be prying. He has to learn how to protect what he wants to keep private and ignore the rest.

As for the golf, McIlroy can only hope this year was an aberration.

Woods went through his first “slump” _ everything is relative when it comes to Woods _ at age 22 in his second full year as a pro. He won only two tournaments. He lost to Nick Price in a playoff at Sun City. He lost to Mark O’Meara in a 36-hole final at the World Match Play Championship. About the only off-course issue he faced was the GQ article that quoted him telling racial jokes.

“As far as battling a slump, that’s just part of playing golf,” Woods said. “You play golf long enough, you’re going to go through it.”

McIlroy headed to his Florida home to start his vacation. He’ll eventually wind up in Melbourne to watch Wozniacki in the Australian Open, and then go to Dubai to start preparing for a new season that will begin in Abu Dhabi.

Even at age 24, this is shaping up as important season.