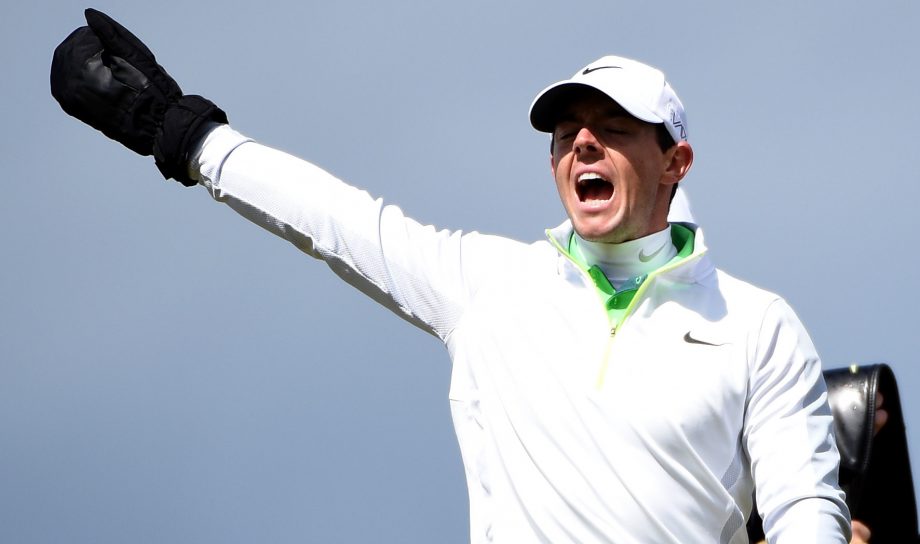 This one, he said, hurt more because it’s personal.

“Obviously I’m playing at home in front of a lot of friends and family. To not play the way I wanted is very disappointing. But I’m sort of getting used to it,” said a downcast McIlroy, whose Rory Foundation charity hosted the Irish Open for the first time.

England’s Tyrrell Hatton showed the field at Royal County Down that the seaside links course, bedeviled with unseasonably frigid gales and pelting showers, could be tamed.

The 23-year-old Hatton, ranked 142nd in the world, set a new course record of 66 to join a five-way tie for the lead at 3-under 139. His score tied a mark from 1939, but club and European Tour officials said it was considered a new record because the course has greatly changed over the past 76 years.

Only 15 of the 156-player field managed to beat par Friday as the changing weather drove the cutoff score to 5 over.

Ireland’s Shane Lowry summed up the sense of frustration when he smashed his putter against his bag and broke it after missing a short putt for par on his third hole. Lowry actually played better when forced to putt with his wedge, managing three birdies and making the cut with a 74.

“Golf’s a weird game and it’ll drive you mad sometimes,” said Lowry, who thanked his caddie for persuading him to stay on the course.

Local fans made the Irish Open a four-day, 80,000-ticket sellout in hopes of seeing McIlroy at his best. He gave them brief hope Friday when he sank a 30-foot putt on the short seventh for his first birdie of the tournament. He picked up another shot at the 12th and needed just two more birdies to make the cut.

But McIlroy mis-hit his approach to the 15th and three-putted for a double bogey, erasing the day’s gains.

“I just shot myself in the foot,” he said.

He drove his shot off the 18th tee into an impenetrable wall of thorny gorse bushes and, after taking a penalty drop, saved par with a 15-foot putt in front of the cheering grandstand.

“I might have to show my face at a couple things,” he said.

He now has nearly three weeks to prepare for the U.S. Open.

“I’m honestly looking forward to a couple weeks off,” he said.