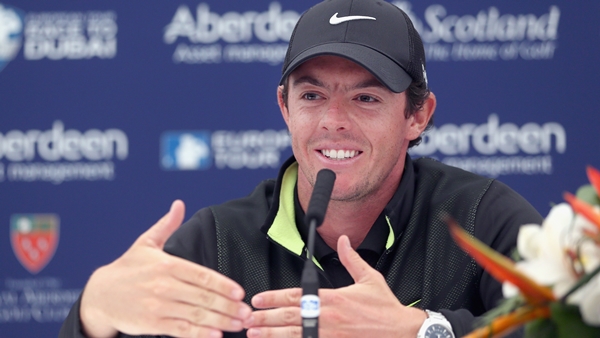 ABERDEEN, Scotland – Three years after virtually giving up on links golf, a more mature Rory McIlroy appears ready to give it another chance.

McIlroy tamed blustery conditions on day one of the Scottish Open to shoot a 7-under 64 on Thursday, giving him a one-stroke lead and showing his links game is in great shape ahead of next week’s British Open at Hoylake.

“I feel I am as prepared as I have ever been to play this type of golf,” a smiling McIlroy said after rolling in eight birdies – six of which came in a stunning seven-hole spell from Nos. 8-14 at Royal Aberdeen.

How things have changed from 2011.

At a wet and wild British Open at Royal St. George’s that year, a frustrated McIlroy opened his heart, saying he wasn’t a fan of tournaments where the “outcome is predicted so much by the weather” and that “there’s no point in changing your game for one week a year.”

Coming from someone who grew up playing on the links in his native Northern Ireland, it was a strange outburst. That seems to be in the past now.

“I’m going to make it my favorite style for two weeks a year,” said McIlroy, adding he was “relishing the challenge” of playing in the wind and rain.

Unheralded Swede Kristoffer Broberg – who went out in the first group at 6:30 a.m. local time – and Ricardo Gonzalez of Argentina shot 65s to lie one shot behind McIlroy.

Michael Hoey, a compatriot of McIlroy, was a stroke further back after a 5-under 66, and former world No. 1 Luke Donald was among four players to shoot 67. Phil Mickelson missed a 3-foot par putt at the final hole for his only bogey in a 68, a solid start by the American to the defense of his title.

McIlroy’s course-record round stood out, though. Refreshed after a two-week break that included a five-day trip to the Spanish island of Ibiza with friends, the two-time major winner looked back to his sharpest.

He showed a good feel on the greens, especially in that barrage of birdies around the turn, and drove straight and long in the face of winds of up to 20 mph (30 kph). One of the highlights of his round was driving the green on the 436-yard 13th hole while the group ahead was on the putting surface.

“I didn’t really think that was out there,” American golfer Rickie Fowler said of McIlroy’s score.

Ominously for his British Open rivals, McIlroy said he felt completely at one with his game, the “polar opposite” to this time last year when he was “not very confident with anything.”

“Everything was pretty much on,” he said. “In the conditions, this is as low as I have ever been.”

McIlroy has had problems backing up good opening rounds this season, so there is still hope for the rest of the field in northern Scotland.

Up at 4 a.m. local time, Broberg showed the kind of form that won him four events on the second-tier Challenge Tour in 2012, earned him his tour card, and marked him as a star of the future.

Five of his six birdies came from Nos. 6-12 and Broberg had just 24 putts in his round, putting him in contention to claim one of the four qualifying berths for the British Open that are available at Royal Aberdeen for non-exempt players finishing in the top 10.

Gonzalez made light work of a front nine playing into the wind, and was 8 under par after an eagle 3 at No. 12. Two bogeys at the end saw him drop off the lead.

Mickelson’s round was typically eventful. A chip to 10 feet from a cart path at No. 13 was his shot of the day, while the British Open champion avoided a penalty on the 10th when his ball moved on his backswing for his second shot. A sharp gust of wind was to blame.

Lee Westwood recovered from dropping five shots in his first five holes to post a 72, and six-time major winner Nick Faldo, playing his first regular European Tour event since 2010, had a 2-over 73 as he gets ready for a return to the British Open.