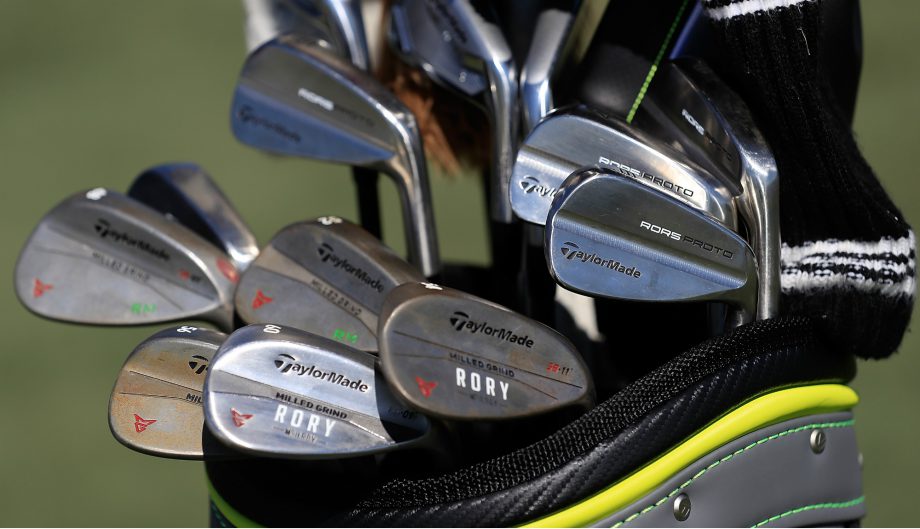 A ring on his finger. New clubs in his golf bag.

If marriage and a new equipment deal were not enough for Rory McIlroy, he also was presented with his own bobblehead for winning the FedEx Cup last year. That’s the only thing that made him feel old.

“All these wrinkles around my eyes,” McIlroy said Tuesday as he gazed at the doll. “It makes me look like I’ve been tour two decades instead of one.”

He is about to complete his 10th full year as a pro, and it’s been a reasonable ride. McIlroy, who turned 28 on Thursday, already has 21 victories around the world and four major championships.

But he’s gone through quite a bit since he tied for seventh at the Masters.

“I needed to address a few issues in between Augusta and here, and I did that with the first 10 days after Augusta,” McIlroy said.

That was related to his equipment, and McIlroy wound up with his fourth brand of clubs in the last five years. He left Titleist for Nike to start 2013, and when Nike got out of the club-making business last year, he began using Callaway. He still wasn’t entirely comfortable, especially with the golf ball, so McIlroy went back to testing and wound up signing a long-term deal with TaylorMade.

“I came to the conclusion that was the best way forward for me to try and improve, try and win more, try to get back to world No. 1, try to win more majors,” McIlroy said.  “So I’m really excited about that.”

Time to show the world what you’re really made of.

He was excited about his wedding, too.

McIlroy met his bride, Erica Stoll, nearly five years ago when she worked for the PGA of America in transportation for the 2012 Ryder Cup at Medinah. Stoll played a big part in sparing him major embarrassment when McIlroy forgot he was in the Central time zone and needed a police escort to the course. He got there with minutes to spare and won his match, and Europe staged a record-tying comeback.

They married two weeks ago in Ireland and spent their honeymoon in the Caribbean.

“It was obviously the best weekend of my life, and hopefully, the best weekend of Erica’s, as well,” he said. “It seems like with everything that’s went on the last few weeks – with getting married and teaming up with TaylorMade – it seems like everything’s very settled. There’s not many question marks going on in my life right now. I feel like everything’s exactly where it’s meant to be, and if you feel like that off the golf course, then I can only imagine that it will help you on it.”

And now it’s back to work.

McIlroy, whose combined 95 weeks atop the world ranking are the most of any player since 2010, is at No. 2. But he’s so far behind Dustin Johnson that he could win The Players Championship and the U.S. Open and still not catch up to Johnson.

McIlroy has not won anywhere in the world since his playoff victory in the Tour Championship last year to capture the FedEx Cup. This week doesn’t figure to be any easier, not so much because it has the strongest and deepest field in golf, but because of the nature of the Stadium Course on the TPC Sawgrass.

It doesn’t really favour any style of play.

“It is the toughest tournament to win in golf,” Jordan Spieth said.

For all his greatness, McIlroy didn’t even break par at The Players until his fourth appearance. He missed the cut three straight times, though he has shown steady improvement in recent years. Even so, he has never been closer than four shots of the winner.

“I’ve always felt that driving is a big advantage for me if I can drive the ball well,” McIlroy said. “Here, it just doesn’t let me do that, and earlier on in my career I had to come to terms with that and come to terms with hitting the ball in the same positions as everyone else off the tee and then trying to beat them in from there.”

Johnson arrived Tuesday fresh off a runner-up finish in the Wells Fargo Championship that ended his three-tournament winning streak. The defending champion is Jason Day, who went wire to wire a year ago. That was his last victory. No one has ever won back to back since The Players began in 1974.

“As well as all the great players who have won here, they all have different styles of game,” Adam Scott said. “So I think that the course is open to so many different guys to have a chance to win that maybe that’s why it makes it a little bit harder to have someone go back to back here. There’s just more guys in the mix.”