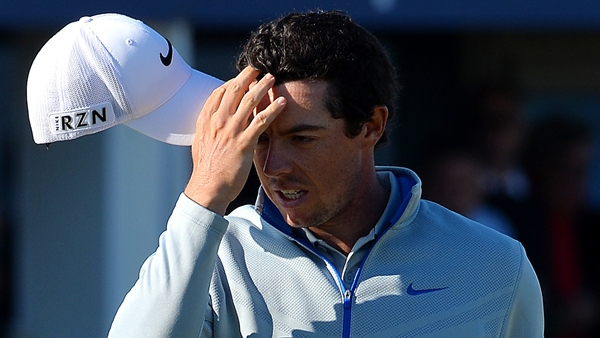 ABERDEEN, Scotland – Rory McIlroy surrendered the lead at the Scottish Open with his latest second-round meltdown on Friday, leaving three players tied for first place on a day when brutal winds played havoc with the field.

Kristoffer Broberg of Sweden, Argentina’s Ricardo Gonzalez and Marc Warren of Scotland were atop the leaderboard on 6 under, with just 17 of 150 players shooting below 70 on the par-71 Royal Aberdeen links course.

McIlroy shot a course-record 64 in the first round but followed it up with a 78, continuing a worrying trend this season that has seen the former world No. 1 fail to build on strong starts.

“Having to talk about it, it’s always being brought up, it’s sort of in your mind,” a frustrated McIlroy said.

Justin Rose shrugged off the effects of hayfever to sign for a 68 and was alone in fourth place, a shot behind the trio of leaders.

Defending champion Phil Mickelson was among the afternoon starters who had to deal with a punishing breeze, especially on the back nine. A 73, which left him at 1 under, was something of an achievement but left him “mentally drained” just a week before the defense of his British Open title.

“I’m a little concerned that it’s taking up a little bit more energy than I’d like ahead of next week,” Mickelson said. “But it’s also a good opportunity to focus on the more difficult shots that we’ll have next week. So it kind of goes both ways.”

Englishmen Lee Westwood (73 for 3 over) and Ian Poulter (74 for 5 over) were the high-profile names to miss the cut.

McIlroy’s brilliant first round suggested the Northern Irishman had turned the corner in his bid to conquer the links but he looked a disgruntled, beaten man after he came off the 18th green.

Over the same seven-hole stretch (Nos. 8-14) where he picked up six shots on Thursday, McIlroy dropped six shots – including a double-bogey 7 at the 12th.

“It was a grind out there,” McIlroy said, “but at the end of the day, it’s a great way to prepare for next week, if nothing else.”

Gonzalez headed out in the next-to-last group and led by two shots on 8 under at the turn. He held himself together through the tough back nine until the last hole, when he made a double-bogey 6 after being forced to take a penalty shot for sending his drive into a gorse bush.

A 71 dropped Gonzalez back into a tie with Broberg (71) and Warren (69), who is leading the Scottish charge and looking to make amends for blowing a three-shot lead with four to play at the Scottish Open in 2012.

“What happened two years ago was tough to take at the time but hopefully it stands me in good stead,” Warren said.

“It would be a romantic tale.”

After admitting to needing an “adjustment period” to fully digest winning his first major at the U.S. Open at Merion in 2013, Rose returned to the winner’s circle after more than a year at the Quicken Loans National in June.

That has given him some self-belief heading into the British Open – and so will a solid start in northern Scotland, despite struggling with hayfever for the last 12 days.

Rose rolled in three birdies on the benign front nine and held on grimly coming back in.

“I came off a victory (on the U.S. PGA Tour) and didn’t do much practice for whatever reason last week, so I came here and felt absolutely horrendous,” Rose said. “The last couple of days I have been trying to find my feel again.

“I am beginning to click back into gear again and see some good shots.”

Paul Waring of England shot a 66 for the lowest score of the day.