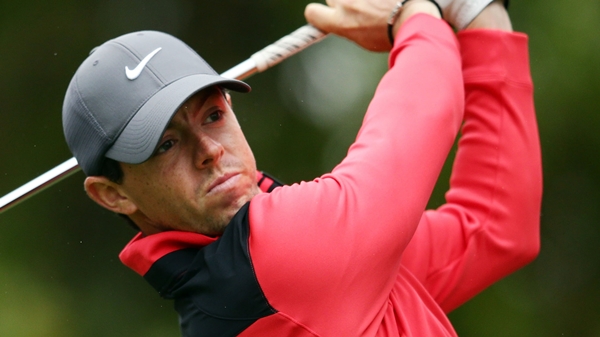 SYDNEY – Rory McIlroy and Adam Scott weren’t paired together for the first two rounds of the Australian Open because organizers wanted to split their marquee players among morning and afternoon groups for the spectators and television.

After Thursday’s opening round, they’re also at opposite ends of the scoreboard.

McIlroy teed off in overcast conditions early Thursday and finished with a 2-under 69 just as Scott was beginning his round – and not very well at that.

Scott’s tee shot on the first went into the woods and he made double-bogey as he shot 74 at The Australian Golf Club.

The Northern Irishman was two strokes behind first-round leader American Jordan Spieth (67). Scott was in 82nd place and will need a good round Friday to make the cut.

“I made the worst of my worst shots and didn’t convert the good ones early,” Scott said. “I have to play three really great days now and it seems that’s what I’m doing week after week. But I’ll claw my way back into it tomorrow morning.”

Australians Aron Price and Scott Gardiner, who had a hole-in-one on Thursday, were tied for second with 68s, with McIlroy in a group of seven tied for fourth.

“When we came out this morning, it was misty and the wind was blowing hard,” said Spieth. “I knew that it was going to play difficult but once the conditions started to clear for us; there was certainly a score out there.”

Spieth said he was impressed with Scott’s calm demeanor despite the Australian’s difficulties Thursday.

“When you know he is having a bad day, a great champion like he is, to see how positive he remains on each shot,” Spieth said.

Geoff Ogilvy, playing with McIlroy, shot 40 on the front nine, his second, including two double-bogeys, and had a 74.

“It was tough to get the ball close to the pins with the wind and these greens being quite firm as well,” McIlroy said. “I thought anything under par today was a decent score and it was nice to birdie the last and shoot something in the 60s. It puts me right there for going into tomorrow.”

McIlroy flew into Sydney on Monday night from Dubai, where he finished tied for second at the season-ending World Tour Championship and admitted he was still a bit jet-lagged.

“It was a 4:30 wake-up call this morning, so it was an early start, so I just want to rest this afternoon and make sure I’m fresh for tomorrow,” he said.

Gardiner went from one extreme to the other over his first two holes.

He double-bogeyed the 10th to start his round, then immediately got the two strokes back with a hole-in-one on the par-3, 172-meter 11th.

Gardiner used the contour of the hole, landing his shot off the putting surface and watching it roll off the fringe and across the green into the hole, winning a new car in the process.