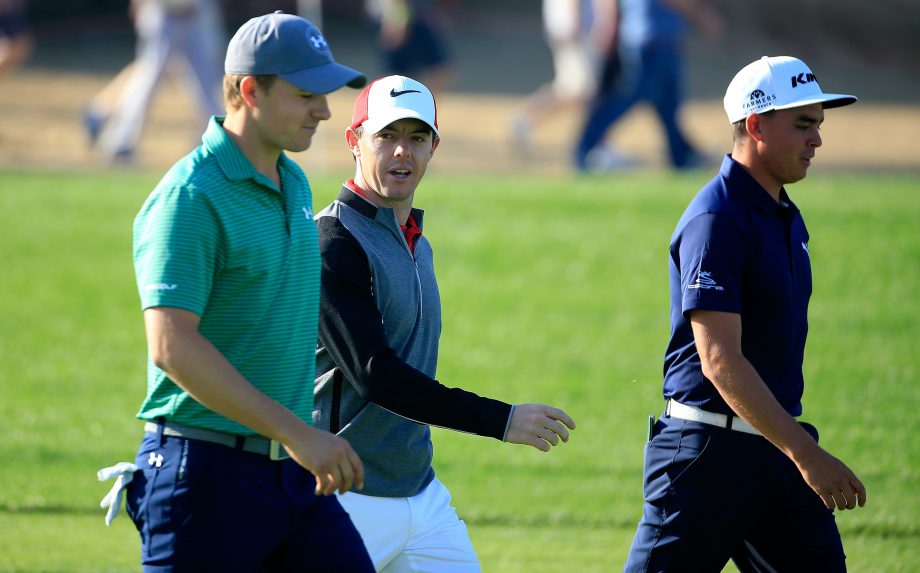 ABU DHABI, United Arab Emirates – Jordan Spieth was aggrieved at being given a warning for slow play, and complained that his tee shots were “short and crooked.”

But after his opening round of the Abu Dhabi Championship on Thursday, the top-ranked Spieth’s biggest concern might just be the sublime form of his playing partner.

Rory McIlroy got the better of Spieth in their first head-to-head of 2016, using his power and accuracy with the driver to set up a 6-under 66 that put him two shots off the lead held by American amateur Bryson DeChambeau.

Spieth, who scrambled well to shoot a 68, made an early-season statement two weeks ago by winning by eight strokes in Hawaii to back up his stellar 2015. McIlroy laid down a marker of his own in his first event of the year after a two-month break and laser eye surgery.

“It was the Rory that I have seen win majors,” Spieth said. “It was spectacular. It was a pretty unbelievable round on a very challenging golf course.”

McIlroy says his eye operation in December will improve his ability to read greens and that seemed to be the case, the No. 3-ranked Northern Irishman making eight birdies – beginning on his first hole with a 20-footer. But it was his driving that set him apart on a warm, wind-free morning in the gulf emirate.

“I was really excited to get going, especially playing in a group like that,” said the No. 3-ranked McIlroy, who was also playing alongside No. 6-ranked Rickie Fowler (70). “Couldn’t be happier.”

Spieth’s first round in a regular European Tour event was a mixed bag and ended with a brush with a rules official, who gave the American a “monitoring penalty” for taking too long over a putt on No. 8 – his 17th hole. Spieth said the decision “didn’t make any sense to me” and was a “bit odd.”

“The guys behind us hadn’t even reached the fairway, on a par 5,” said Spieth, who acknowledged that he had taken extra time to line up the putt.

It was the first round since the European Tour modified its Pace of Play policy – and officials made an example of the biggest name in golf.

“Sometimes referees have to use a bit of common sense,” said McIlroy, who sympathized with Spieth.

There were no such problems for another 22-year-old American.

DeChambeau was making only his seventh start in a professional event but showed no nerves in shooting seven birdies and an eagle for a 64 to lead a stellar field. Henrik Stenson (65) was a shot behind, with McIlroy and Branden Grace a further stroke adrift.

DeChambeau is one of golf’s characters – calling himself the “Golf Scientist,” he has modified his irons to make them all the same length, has two driver swings, puts his balls in Epsom salts to establish which of them are slightly flawed, and wears a Ben Hogan-style flat cap.

“I’m just growing in confidence and belief every single day,” said DeChambeau, who is regarded as one of the hottest young players in the sport after also winning the U.S. Amateur and NCAA titles in 2015.

Stenson birdied five of the last eight holes in his first round since keyhole surgery on his right knee in December.

McIlroy has also finished second in Abu Dhabi – four times, in fact – and the course suits his game. He thrived in playing with esteemed company and said he took the way he was hitting the ball on the range in Dubai last week onto the course.

Two three-putts for birdies were the only negatives for McIlroy, whose longest birdie was from 25 feet on No. 13.