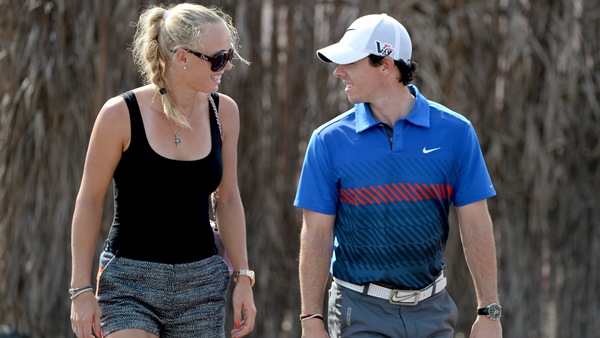 KAPALUA, Hawaii – Rory McIlroy is claiming his first win of the new year – his engagement to tennis star Caroline Wozniacki.

One of the top power couples in sports announced their engagement Tuesday night on Twitter, which was Wednesday morning in Australia. A spokesman for McIlroy confirmed he popped the question in Sydney, where Wozniacki is starting to prepare for the Australian Open in Melbourne.

They included a collage of three photos – her engagement ring, a photo of them together and fireworks over the Sydney Harbor.

Happy New Year everyone! I have a feeling it’s going to be a great year!! My first victory of 2014 #shesaidyes!! pic.twitter.com/gxO7rDDyPY

That should put to rest two reports out of Ireland at different times this year that they were splitting up. One of those reports was in August, even though McIlroy and Wozniacki had dinner in New York the following night ahead of the U.S. Open in tennis.

They first began to see each other in the summer of 2011, shortly after McIlroy won his first major with a record-setting performance in the U.S. Open at Congressional. They confirmed they were dating a few months later, and they were never shy about sharing their relationship on social media.

He changed his avatar on Twitter of the couple when Wozniacki was No. 1 and McIlroy was No. 2. That changed within six months, when McIlroy first ascended to No. 1 in the world and Wozniacki began a steady decline down the WTA ranking. She now is No. 10, while McIlroy goes into the 2014 season at No. 6.

McIlroy is coming off a rough season in which he failed to meet enormous expectations while changing golf equipment. He also left his management company in a nasty split that is to be settled next year in an Irish court. The 24-year-old from Northern Ireland did not win a tournament until the Australian Open in December.

It was his first year of serious criticism, and McIlroy said it only got to him when it involved his personal life.

“I don’t care what people say about my golf,” he said. “It’s when people start digging into my personal life, that’s where it starts to annoy you – whether it’s Caroline, whether it’s management, all that stuff shouldn’t be a consequence to how I play my golf.”

When he was asked jokingly whether they broke up five or six times this year, McIlroy gave a hearty laugh and said, “Something like that.”

Wozniacki joined him at the World Challenge in California, and then they headed to south Florida and his new home for the first part of the holidays. He later when to Northern Ireland before heading Down Under.

Tweets of congratulations about their engagement began pouring in from Graeme McDowell, Ian Poulter and Francesco Molinari.