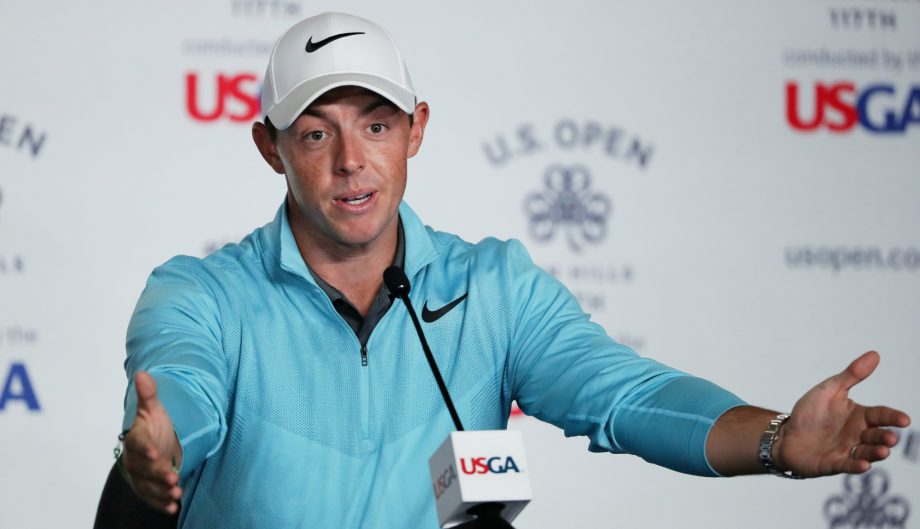 Rory McIlroy couldn’t hold back on his complaints about the U.S. Open at Erin Hills, with an unusual twist: He was discouraged to hear the USGA is making it too easy.

The USGA said Tuesday that overnight storms and more rain in the forecast were making some of the native grasses lay down, which would create such dense rough that it would be virtually unplayable. So it set out to trim the thickest rough on the fourth, 12th, 14th and 18th holes.

This was bad news to McIlroy, whose power and accuracy off the tee is his strength.

His issue – and the opinion Kevin Na did not share when he posted video of thick stuff earlier in the week – was that the fairways were wide enough already.

.@McIlroyRory is not having the #USOpen fescue drama ?

"If you can't hit it within [the fairway], might as well pack your bag." pic.twitter.com/EapCbnSh98

“We have 60 yards from left line to right line,” McIlroy said. “You’ve got 156 of the best players in the world here. If we can’t hit it within that avenue, you might as well pack your bags and go home. These are the widest fairways we’ve ever played in a U.S. Open. Even the first and second cut is another ten yards on top of that. So if you’ve got 50 or 60 yards to hit into and you’re complaining about the fescue that’s wider than that, I don’t think that’s an issue.”

The grass is so thick that it’s essentially a one-shot penalty. The options are to take a penalty shot for an unplayable lie or hack it out to the fairway, assuming the player can get a club on the ball.

“I get that it’s thick and whatever, but it’s a hazard,” McIlroy said. “If you put red lines just right along that people wouldn’t complain. It’s a hazard. I don’t know. It’s a U.S. Open. It’s supposed to be a tough test. And if guys can’t put it into play within a 50-yard zone, I don’t think they’ve got much to complain about.”

He took a photo of the maintenance staff trimming away and tweeted, “Guess the USGA decided to be nice this week and cut down some of the rough.”

Guess the USGA decided to be nice this week and cut down some of the rough ? pic.twitter.com/RPHunJyKx1

RULES OFFICIALS: The U.S. Open wants to be a little quicker with its communications over rules issues, especially in light of last year at Oakmont.

Dustin Johnson’s ball moved ever so slightly on the fifth green. The USGA realized a few holes later it needed a closer review. It told him about the possibility of a penalty on the 12th tee, and said he could review it after the round. That meant Johnson played the last seven holes not knowing what his score would be.

He won by four, then was docked one shot, so it went down as a three-shot victory. He still got the trophy, but the USGA looked bad.

USGA President Diana Murphy says there will not be walking scorers on the weekend for the first time. Instead, the USGA will station at least two officials on every hole (except for par 3s) and in other strategic spots along the course.

“We regretted the handling last year,” Murphy said in a meeting with golf writers. “We want to stay out of the way and not be part of the story.”

FIRST-TIME WINNERS: Zach Johnson won the British Open two years ago at St. Andrews for his second major. Since then, there has been nothing but first-time winners at the majors – Jason Day, Danny Willett, Dustin Johnson, Henrik Stenson, Jimmy Walker and Sergio Garcia.

When players don’t have a reasonable explanation, that can mean only one thing – it’s a cycle more than a trend.

Jordan Spieth, for example, noted that at one point he, McIlroy and Day had combined to win five of six majors when they were Nos. 1, 2 and 3 in the world.

“So maybe it’s a trend and maybe that’s the way that it happened to crumble there,” he said, without mentioning any particular cookie.

It’s way too early for a trend.

Not too long ago, first-time major champions had won 12 out of 13, from Lucas Glover in the 2009 U.S. Open through Webb Simpson winning the 2012 U.S. Open. The exception in that span was Phil Mickelson at the 2010 Masters.

Since then, Europeans have won 15 majors.

Of course, Tiger Woods won 12 of 33 majors during one stretch. That didn’t leave much room for anyone else.

McIlroy referred to it as a cycle.

“I just hope I end that streak this week,” McIlroy said.

PLAYOFF FEVER: A U.S. Open record is on the line this week at Erin Hills.

Dating to Tiger Woods winning the 2008 U.S. Open in a playoff over Rocco Mediate at Torrey Pines, there hasn’t been a Monday playoff. That’s eight straight U.S. Opens, matching the longest streak without in U.S. Open history.

There also was eight years without a playoff after Lou Graham in 1975 at Medinah until Fuzzy Zoeller beat Greg Norman at Winged Foot in 1984.

The only really close call was Dustin Johnson missing a 4-foot birdie putt to finish one shot behind Jordan Spieth in 2015 at Chambers Bay.

MCILROY’S SUMMER: Rory McIlroy has played only six tournaments this year because of a rib injury that cost him seven weeks at the start of the year, and a recurrence of the injury that made him sit out six weeks ahead of the U.S. Open.

But he has a busy summer scheduled.

McIlroy is playing the Travelers Championship next week in Connecticut. After a week off, he plans to play three straight tournaments in Europe – the Irish Open (that he hosts), the Scottish Open and the British Open.