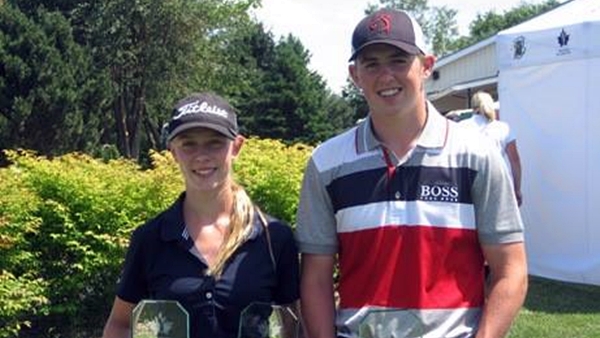 In the boys competition, Creighton was victorious after turning in a performance for the ages. He was solid all week, scoring under par all four rounds and turning in a 71 Thursday to finish at 6-under for the tournament. Creighton would end up winning by a whopping 16-strokes over Oakfield, N.S.’s Ian Lewis. However, early on it looked as though it might be a closer finish.

“It was pretty close early on,” explained Creighton. “I made a 20 foot par putt on #2 to par, Ian was playing well and I was thinking I’m going to have to play another good round to win.”

In the end, Lewis would have a rough day, and Creighton was in the driver’s seat to win his first junior title.

Creighton’s sixteen stroke victory was also the largest since 1950 when Bob Rae won by 18 shots over Clarence “Gabby” O’Hearn at Lingan Golf and Country Club.

Creighton said he hopes to continue his success at the Canadian Junior Boy’s Championship, both as an individual and as a member of Team Nova Scotia.

Finishing fourth and earning the final spot on the Nova Scotia team was 14-year-old Shaun Margeson from Oakfield, N.S. who won the two day Bantam Championship on Tuesday as well.

On the girls side, Meghan McLean and Allison Chandler of Chester, N.S. made the Dartmouth Dodge Junior Girls Championship the closest event in recent memory. The pair would finish regulation play deadlocked and would head to a sudden death playoff, where McLean won on the third playoff hole.