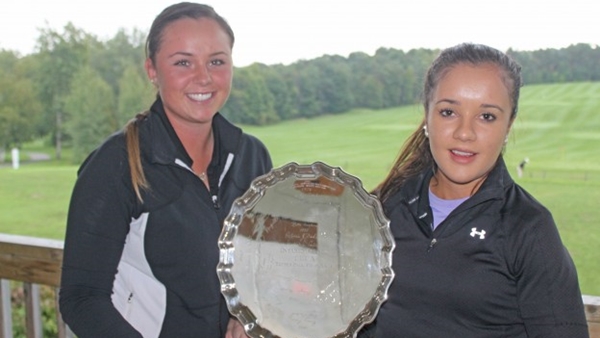 BARRIE, Ont. – Another season is in the books for the Golf Association of Ontario (GAO) as the 2014 campaign came to an end Sept. 15 with the year’s final event – the Women’s Four-Ball Championship. Nineteen teams took to the Highlands Course at Horseshoe Resort and at the end of the day it was the team of Katelyn McMahon and Claire Hernandez who captured the title.

The duo posted a 2-under (69) during the round to finish with a three-shot win. For Hernandez, 17-years-old from Palgrave and the Ladies Golf Club of Toronto, it is her second consecutive title at the event and third overall. The former Team Ontario member captured last year’s event with Kennedy Bodfied and the 2010 championship with Alina Rogers. For McMahon, 17-years-old from Brampton and the Brampton Golf Club, it is her first Women’s Four-Ball title.

Finishing second was the team of Komoka’s Alex Amos and Kingston’s Diana McDonald. McDonald, a member of the GAO’s Ottawa Regional Team, and Amos finished the day one-over (72).

Taking the bronze medal was the Thornhill sister duo of Eunice and Ellice Hong. Ellice, a member of the York Regional Team and Eunice carded a three-over 74.

In fourth was the team of Stouffville’s Ivy Steinberg and Toronto’s Kelly Koselek at five-over (76). rounding out the top five in a tie for fifth was the team of Fort Erie’s Linda Burroughsford and Kitchener’s Denise Schaefer along with London’s Sue Postian and Strathroy’s Jane Hedges-McKinnon who both finished at six-over (77).

As for the net division, it was won by the team of Lynne-Marie Fabris and Marianne Vardon at five-under (66).