Meet the men and women of 2014 Team Canada 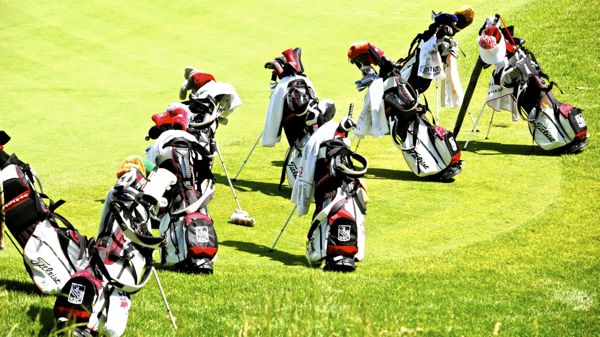 Garrett Rank returns to the National Team for his third consecutive year, bringing an array of elite golf skills to go along with a charismatic attitude and outlook on the game. Rank, 26, graduated from the University of Waterloo in 2012 and has set his goals on making the World Amateur team in 2014.

Rank has also defeated a serious illness that he was diagnosed with in the winter of 2011. At 22 years young, Rank learned that he had testicular cancer. After successful surgery, he stepped back on the golf course with an enlightened perspective on the game to help him along his journey as one of Canada’s top amateur golfers.

Team Canada is pleased to welcome back Corey Conners, one of Canada’s top ranked amateur golfers (No. 33). Hailing from Listowel, Ont., Conners attacked green after green in the most prestigious events of 2013, including an appearance at the 2013 RBC Canadian Open. A senior at Kent State University, Conners captured a slew of top-10 finishes, highlighted by a second place finish at the U.S. Amateur Championship, a runner-up finish at both the North & South Championship and Canadian Men’s Amateur Championship and a third place finish at the Monroe Invitational.

At 21 years old, Conners has positioned himself to excel on the world stage as he enters his final collegiate season. The calm, composed Canuck is returning for his third year on the National Team. He was also a member of the Development Squad in 2010.

Conners plays out of the Listowel Golf Club, a 27-hole semi-private course in his hometown.

Taylor Pendrith bombs his drives 300 yards plus time and time again. The long-hitter from Richmond Hill, Ont., sits as Canada’s highest ranked male amateur at No. 29 in the world entering his senior year at Kent State alongside fellow teammate Conners. He is returning to the National team for a second straight year with high hopes of building on his budding golf talent.

Highlights from this past season include a win at the prestigious Porter Cup held at the Niagara Falls Country Club in Lewiston, N.Y. The Porter Cup plays host to some of the best amateur golfers from around the world every year, making the 22-year-old’s accomplishment all the more impressive. With the win, Pendrith ended a 28-year drought marking the last time a Canadian won the event.

Pendrith plays out of the Station Creek Golf Club, a Clublink course in Gormley, Ont.

Chris Hemmerich returns to the team for a second consecutive year after another strong performance during the 2012/13 season. Despite receiving interest from U.S. schools, the 20-year-old elected to stay home and study in Canada, choosing to attend Guelph University. Since then, Hemmerich has continued to lead by example as the captain of the men’s team.

Some of his best accomplishments include placing second at the 2013 Canadian University/College Championship and finishing in a T12 at the Porter Cup. Hemmerich also picked up a sixth place finish at the 2013 Canadian Men’s Amateur Championship and finished in a T3 at the 2013 Ontario Amateur. Already this season, the Kitchener, Ont., native has posted four consecutive top two finishes playing for Guleph, solidifying his status as one of Canada’s best young amateurs.

Hemmerich is a member at the Westmount Golf & Country Club in Kitchener, Ont.

After being on the Development Squad for four years, Adam Svensson has made the jump to the National Team – and it’s well deserved. Now acting as the National Team’s youngest member, Svensson has strung together an impressive list of accomplishments. Hailing from Surrey, B.C., Svensson was acknowledged with the Phil Mickelson award, given to the most outstanding freshman in NCAA Division II men’s golf after his freshman season at Barry University.

In his first year at Barry, Svensson helped the Buccaneers win the Men’s Division II NCAA Championship. Individually, the 2012 Canadian Junior Boys champion placed T4 at the prestigious Sahalee Players Championship in early July. His strong play landed him an exemption into the RBC Canadian Open against the world’s best, an experience that many sophomores don’t get.

Svensson is positioned out of the King’s Links by the Sea, located in Delta, B.C. and is currently ranked No. 62 in the World Amateur Golf Rankings.

At just 16 years old, Brooke Henderson sits as the No.9 ranked female amateur in the world. The teenager from Smiths Falls, Ont., continues to show poise beyond her years in each and every competition. This year alone, the 10th grade student won the Canadian Women`s Amateur Championship and the CN Future Links Pacific Championship. She also made her mark on the professional stage with a third place finish on the CN Women`s Tour and a T35 finish at the LPGA Manulife Financial LPGA Classic and an appearance at the CN Canadian Women’s Open. Perhaps her most impressive accomplishment was making the cut at the 2013 U.S. Women`s Open – an LPGA major and premier world event.

This marks Henderson’s third year with the High Performance program, being on the National Team last year and the Development Squad the year before that. With lots of time for further development, Henderson`s future looks extremely bright.

A senior at NC State, Marchand brings a wealth of experience back to the National Women`s Team as she enters her third consecutive year. Based out of Orangeville, Ont., Marchand finished T11 at the Canadian Women’s Amateur and also took home the low amateur honours at the 2013 PGA Women`s Championship of Canada, finishing T5 overall against a very competitive field.

The 2012 All-ACC member also notched a T4 finish at the CN Women`s Tour event in Québec, showing her ability to match up against already established professionals. Marchand also excels as a student of engineering, being named to the All-ACC Academic team in 2012.

Augusta James will be entering her fourth consecutive year with the High Performance program. The 20-year-old from Bath, Ont., is building on an impressive collegiate career that features becoming the first NC State member to ever win the ACC Freshman of the year award. Now in her junior year, James has opened with a T3 finish at the Mason Rudolph Championship.

This past season James finished in fifth on the CN Canadian Women’s Tour Order of Merit after a T3 finish at CN Women’s Tour B.C. and T7 finish at the Quebec stop in the tour’s first two events. James was also a member of the 2013 Canadian Copas de las Americas championship squad, where she finished in a tie for fifth individually.

James plays out of the Loyalist Country Club in her hometown of Bath, Ont.

Making the jump from the Development Squad to the National Team is Calgary`s Jennifer Ha. The 19-year-old junior at Kent State earned her promotion after just one year in the National Team program. In her junior season at Kent State, Ha was recognized for two consecutive weeks as the Mid-American Conference (MAC) golfer of the week after victories at both the Minnesota Invitational and Nittany Lion Invitational. Ha also won the MAC Freshman of the Year for Kent State in 2012.

The 2013 Pacific Northwest Amateur champion was also listed on the All-Academic team for the MAC. Her intended major is communication studies.

Ha is a member at the 45-hole, Glencoe Golf & Country Club in Calgary.

After a two year hiatus from the program, Team Canada is pleased to welcome back Anne-Catherine Tanguay to the National Squad.

Entering her senior year at the University of Oklahoma, the Québec City native has built a strong foundation of golf skills over the years. Most notably, Tanguay has competed in all 34 collegiate team events, which include 11 top-10 finishes. The business major was also named to the 2013 All-Big 12 Conference Team as well as the All-Big 12 Academic Team. This past summer season, Tanguay finished runner-up at the Canadian Women`s Amateur.

In her earlier years, she was named the 2010 Athlete of the Year at St. Lawrence, a Cégep school in Québec City. Tanguay was a member of the National Team in 2011 and a member of the Development Squad in 2010 and 2009.

The two-time Canadian Junior Boys champion is returning to the Development Squad for the third consecutive year. This year, he will be taking his talents south of the border as a freshman for the Division I University of Washington Huskies.

Kwon, the 2013 CN Future Links Pacific champion, will act as the one over-aged junior (18) eligible on the Development Squad. Hailing from Pitt Meadows, B.C., Kwon brings his elite skills back to the team, including the confidence gained from winning the gold medal at the 2013 Canada Summer Games.

Calgary’s Matt Williams returns to the Development Team for a second year. The 17-year-old Calgary native’s past season was highlighted by a runner-up finish at the CN Future Links Prairie Championship and a T9 finish at the Callaway World Junior Championship.

Williams has given a verbal agreement to play for the University of Houston in 2014, alongside fellow Canadians Blair Hamilton, Emmett Oh and Matthew Scobie.

Williams is a member at the Pinebrook Golf & Country Club in Calgary.

The smooth-swinging righty from Vaughan, Ont., makes his debut on the Development Squad after a very strong showing provincially this past season that saw Gil finished in a T5 at the Ontario Junior Boys Championships and T12 at the Ontario Amateur Championship. During that time, Gil was a part of the GAO Under-17 Provincial Squad.

Gil won the AJGA CourseMax/Philadelphia tournament this August and placed second at the AJGA Ravenwood event just two months earlier. The 15-year-old will look to keep things rolling in 2014, beginning with the Sprit International event in Texas at the end of October

Gil fine-tunes his skills in the offseason at the Glendale Golf & Country Club in Hamilton, Ont.

New to the Development Squad is Carter Simon, a 16-year-old from Sutton, Ont. This past May, Simon became the CN Future Links Ontario champion by winning a two-hole playoff at the Listowel Golf Club with an eagle. He followed that up with a third place finish at the CN Future Links Prairie championship and a fifth place finish on the individual leaderboard at the 2013 Canada Summer Games.

Simon was also a teammate of Gil’s on the GAO Under-17 Provincial Squad.

Papineau also fared well against the country’s best junior talent, finishing T8 at the Canadian Junior Boys Championship. He will tee-it-up alongside his new Development Squad teammate Gil at the Spirit International in late October.

In the offseason, Papineau trains at the Royal Bromont Golf Club in Bromont, Qué.

Making her return for a fourth year with the program is Surrey, B.C., native, Taylor Kim. A recent transfer to Kent State, the 18-year-old sophomore has tallied a number of top-5 finishes while being a part of Golf Canada’s High Performance program. This year alone she finished in a third at the Canadian Junior Girls Championship, T13 at the Canadian Women’s Amateur Championship and picked up two T3 finishes at the both B.C. Women’s Amateur and the CN Future Links Pacific.

Kim plays out of the Surrey Golf Club in Surrey, B.C.

Attending Champlain St-Lawrence in Québec City, Tanguay was crowned as the CCAA Girls Champion for a second straight year (2013, 2012). At this year’s event, Tanguay won by a dominating 14-stroke margin with a cumulative score of 5-under par through three rounds of play.

New to the Development Squad in 2013 is the recently crowned Alberta Junior Girls champion, Jaclyn Lee of Calgary. Lee also added another title win at the CN Future Links Prairie Championship and went on to finish eighth at the Canadian Junior Girls Championship.

The 16-year-old Canuck is poised to build off an impressive 2013 season going forward that included a T4 finish at the 2013 Canada Summer Games.

Lee plays alongside Jennifer Ha out of the Glencoe Golf & Country Club in Calgary.

Garrison is a member at the Country Hills Golf Club in Calgary.