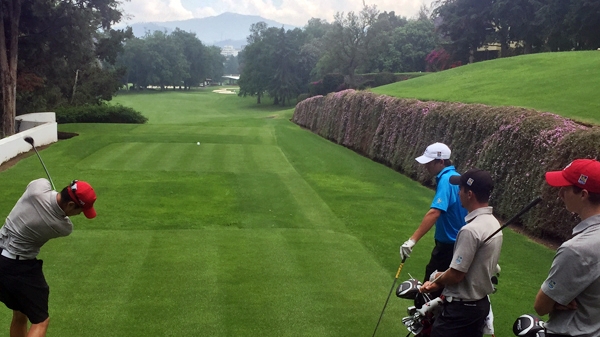 SAN BUENAVENTURA, TLALPAN, Mexico – Four of the six Men’s Development Squad members are ramping up to compete in the zone qualifier for the 2015 Toyota Junior Golf World Cup, which as usual will be held in Japan in June.

The qualifying tournament consists of four teams of four athletes—all gunning for one of two available spots to earn a ticket to the World Cup in two months. Each team will count their three lowest scores for the day, counting towards their overall aggregate total. The two lowest scores after Thursday’s final round at the Golf Club of Mexico will advance onwards to Japan.

The Canucks are set to square off against Dominican Republic, Mexico and Costa Rica.

“The course here lends to the strengths of the boys—it sets up well for us,” he said. “We’ve put in a lot of great practice as a team in the past few months and we’re excited to get started tomorrow.”

Last month, Ratcliffe and the boys competed at the Southern Cross Invitational in Argentina, coming out with a fourth-place finish. The international team experience will be a great asset for the squad as they gear up for tomorrow’s competition.

Toyota Junior Golf World Cup is the world’s only junior golf championship in which 20 national teams, winners of regional qualifiers held across 6 continents and participated by more than 60 national teams, compete for the world champion trophy.

In 2014, the Men’s Development Squad placed seventh, 11 strokes back of champion Norway. The best Canadian finish came in 1994 when the team took home runner-up honours.