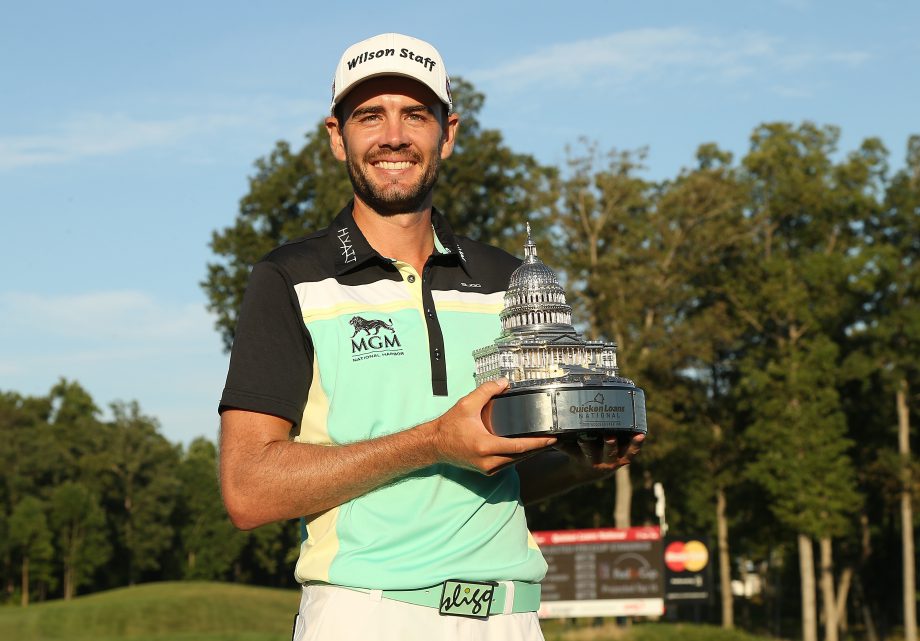 GAINESVILLE, Va. – Troy Merritt walked to the final tee with a three-shot lead and slapped hands with fans on both sides of the ropes, knowing he had all but wrapped up his first PGA Tour title.

Not bad for a player who had missed five cuts in a row coming into the Quicken Loans National.

Merritt shot a 4-under 67 on Sunday and finished his first career victory in 96 starts with a flourish, rolling in a 34-foot putt for birdie on the 72nd hole. After the putt fell, he raised his hands, looked toward the crowd and shrugged his shoulders, as if to say that it was the perfect way to finish.

The victory came a day after Merritt soared to the lead with a tournament-record 61 at Robert Trent Jones Golf Club, and his closing 67 matched the best of the day on another sweltering afternoon.

Rickie Fowler, who started the day one shot off the lead, also made a birdie on the final hole to claim second place at 15 under, and David Lingmerth was third, but both had up-and-down rounds. Fowler shot a 69 that featured seven birdies and five bogeys, and Lingmerth’s 69 included five birdies and three bogeys.

Merritt, who appeared to be walking in place as he set up for each shot, being sure to get his feet in exactly the right position, lost the lead only briefly on the final day and stumbled just once, with a three-putt bogey at the par-4 12th, the most difficult hole on the course. He made five birdies.

For much of the day, the tournament seemed destined to become a duel between Merritt and Bill Haas, who had six birdies in his first 10 holes and got to 17 under, tied with Merritt and three clear of the rest of the field. But Haas struggled to find the fairway on the back nine, making four bogeys and a double bogey in the final seven holes and leaving Merritt in position to win it by just making pars.

It helped that all of the expected challengers faltered.

Fowler, one shot back at the start, had three bogeys on the front nine.

Lingmerth, who once shared the lead with Haas and Merritt at 15 under, followed with a bad bogey at the par-5 eighth, the first of three bogeys over the closing 10 holes that kept him from making a move.

Haas wound up with a 70 and shared fourth at 12 under with defending champion Justin Rose and four others.

Merritt, meantime, never looked as though the stage was too much.

He opened with a birdie to take sole possession of the lead, and made two more to turn at 3 under. His bogey at the difficult 12th dropped him into a tie with Haas at 16 under, but Haas then crumbled.

Tiger Woods made a run at contention with birdies on five of his first 10 holes to get to 10 under, but with a huge crowd following and shouting encouragement with every swing, he missed 3-foot putt at No. 11, the first of three bogeys in four holes that killed his chances of making a serious charge.

His bogey on the 12th came despite one of the best shots of the tournament. After hitting his drive well right and into a hazard, he took a drop and then hit a blind 5-wood to the back fringe of the green, about 15 feet from the cup. His bid for par buzzed the right edge of the hole, but did not fall.

Woods rose from No. 195 to No. 185 in the FedEx Cup rankings and has just three weeks left to climb into the top 125 and qualify for the FedEx Cup playoffs, but said that that is not his focus.

Kevin Chappell, who shared the overnight lead, shot a 77 to finish in the tie for 18th at 8 under.